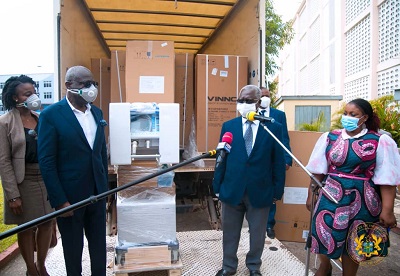 The government has received 10 medical ventilators for distribution to eight hospitals across the country to boost theirmanagement and handling of COVID-19 cases.

The equipment were donated by two private companies; Peewood Limited and Tema Bonded Terminal,yesterday as their contribution to the fight against the pandemic.

According to the donors, two of the ventilators were sent to the Ghana Ports and Harbours Authority (GHPA) International Maritime Hospital, Tema and same number to the  Komfo Anokye Teaching Hospital.

A medical ventilator, is an equipment that assumes control over the body’s breathing process when the disease has caused the lungs to fail and gives the patient time to fight off the infection and recover.

The donation, by the two companies, brings to 72 the number of ventilators in the country.

Already the Ministry of Health is in the process of procuring 50 additional ventilators.

Mr Osafo Maafo expressed the government’s gratitude for the gesture and assured donors that they would be distributed as they had indicated.

He called on other institutions to rise to the occasion and support the government in the fight.

Touching on restrictions to curb the virus, he said the government would take its final decision on whether or not to ease on Friday, May 29, 2020 as the government was concluding its engagement with the identifiable groups.