Atletico Madrid’s Thomas Partey …10 things to know about him 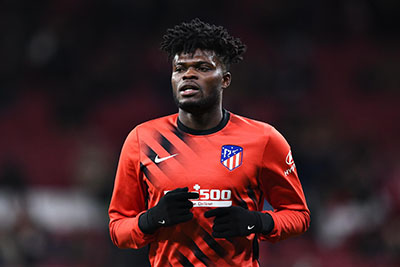 Atletico Madrid midfielder, Thomas Partey, is one of the most sought-after players in Europe at the moment.
Following a very impressive season for his club, Partey has been linked all summer with a move to some of the biggest clubs in Europe.
Premier League side Arsenal appear to be the favourites to land a deal for the Ghanaian, having been pursuing him since January.
The English club is, however, reluctant to pay Partey’s €50m release clause and recently had an offer of £23m plus Matteo Guendouzi rejected by Atletico.
The Spanish club is also desperate to keep him and have reportedly offered him an improved contract.
The player is still a bit of an unknown quantity to many Premier League fans off the pitch.
So here are a few things to know about Thomas Partey, posted on the official website of La Liga, as clubs continue to wrangle for his signature.
• He was born in Odumase Krobo (Ghana) on June 13, 1993, and grew up playing in teams from his home town.
• He’s the oldest of eight children in his family.
• His father runs and trains a team in Odumase Krobo, where Thomas started playing until he was nine.
• While playing for that team, his father gave him the nickname “Senegal”, because he reminded him of a friend with the same name.
• After playing for his father’s team, Thomas developed as a footballer in a neighbourhood side while waiting for new opportunities.
• The chance to take a big step up came when Tema Youth, a Ghanaian team from Division Two, spotted him. With them, he earned a promotion play-off to the Ghanaian top-flight.
• His performances were noted by the scouts and glowing reports about his abilities swept through the country. Thomas has said an agent registered interested with him in 2011 despite never having seen him play.
• His agent quickly saw his potential and decided to take him to Spain, where he was given a trial with the Atletico Madrid youth academy. The Rojiblanco coaching staff did not hesitate to sign him.
• In four months, he made the leap from their Under 18s to the Under 19s, and a season later he was already in the ‘Colchonero’ second team. He was loaned out to RCD Mallorca and Almeria before Diego Simeone would give him a run in the first team.
• He has played 26 times for Ghana’s national team, the Black Stars and scored nine goals.