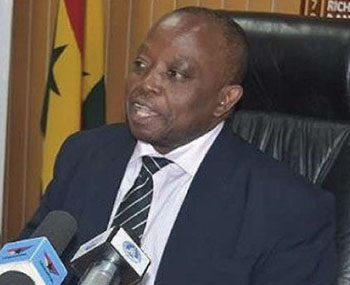 The Auditor-General has rejected a request by the Chief of Staff for an audit verification to be conducted for the payment of salary arrears to be given to more than 200 former and current Members of Parliament (MP).

Daniel Domelevo, the Auditor-General, explained that the request made by the former MPs was invalid and amounted to a conflict of interest because most of the beneficiaries were either serving as members of the current government, including the president and the Chief of Staff or were still in parliament.

In a letter dated May 8, 2020, the Auditor-General had however, stated that because some MPs on list for salary arrears were under investigation for receiving double salaries, it would not be right to pay any further monies to them.

The Chief of Staff, Akosua Frema Osei-Opare’s request was based on a letter from a group known as Forum for Former Members of Parliament (FFMPs), some of whom left Parliament more than 10 years ago.

They are requesting payment of arrears of salaries and emoluments amounting to more than GH¢29.7 million owed its members by the State, and won’t give up on its demands and will seek redress at appropriate quarters.

Mr Domelevo cited case of conflict of interest since some beneficiaries of payment of supposed salary arrears were occupants of various positions in executive arm of the government, whom he described as ‘the approving authority’.

But David Apasera, former MP for Bolgatanga Central Constituency in the Upper East Region for Peoples National Convention (PNC) and leader of Forum, said they were not moved by the decision of  the Auditor-General, saying, “ Options are there if you have an entitlement and the government is refusing you your entitlement, you can go through right quarters for redress.

“The appropriate quarters are there, we can go to for redress, we are not bothered by opinion of Auditor-General, if Auditor-General had time to listen to us, he would have understood our case, nobody told us to come up with issue, we took it up on our own, we didn’t go to discuss with Chief of Staff, we did it on our own because it is legitimate,” Mr Apasera bemoaned.

For his part, Majority Leader, Osei Kyei-Mensah-Bonsu was unhappy with the Auditor-General’s decision to reject the Chief of Staff’s request for conduct of an audit verification that would pave way for payment of salary arrears to be made to more than 200 former and current MPs.

He, however, clarified contrary to Auditor-General’s assertion, just about four MPs from  Majority would have benefitted from payments and described it as unfortunate comment to come from the Auditor General and Majority who would otherwise come for consideration were only three or four but the Minority have many.

“It is my considered opinion former MPs are not entitled to what they are asking for, but it also came to me as surprise our former MPs are making such request at time of  pandemic which has taken the entire world by surprise,” Mr Kyei-Mensah-Bonsu said. -citinewsroom.com