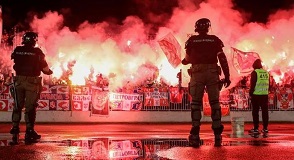 A near-capacity 25,000 crowd attended Partizan’s Belgrade derby victory over Red Star on Wednesday in the latest sign that football is starting to edge towards normality following the coronavirus pandemic.

The Serbian government has been loosening lockdown rules and earlier this month it announced that open-air gatherings with an unlimited amount of people would be allowed.

But coverage from television channel RTS appeared to show little sign of health guidelines being in place as Partizan beat fierce rivals Red Star 1-0 in the Serbian Cup semi-final match.

It turned out to be a tense derby in a familiar atmosphere at Partizan’s stadium as both sets of fans lit flares that covered the stadium in a thick smoke, with Bibras Natcho settling the match in the 58th minute.

Natcho’s close-range shot trickled through Red Star keeper Milan Borjan’s arms into the net after dazzling footwork from striker Umar Sadiq, who left his marker flat-footed and squared the ball to the Israeli midfielder.

Sadiq was a handful all evening for Red Star’s defenders, running past them almost at will and only a string of good saves from Borjan denied the towering Nigerian a goal.

Hungary became the first European country to reopen stadiums to supporters two weeks ago, although with capacities severely reduced due to social-distancing rules.

Belarus was the exception during the pandemic, with the nation never closing grounds or halting football while most of Europe was under lockdown.