Big salute for the gallant boys 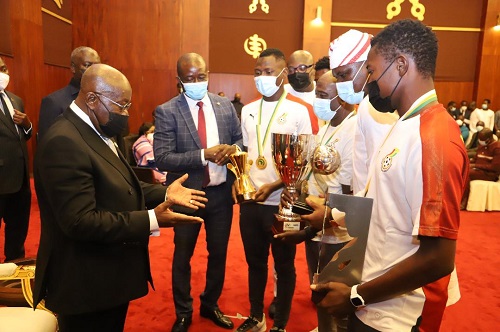 Even though they left the shores of Ghana as sub-regional champions, only a few could think about them screeching a notch further to conquer Africa.

No! This was not the ideal generation of Black Satellites that many could muster the courage to favour for a major continental glory.

But why was the team not given a dog’s chance? Why did we play down on their capabilities? Why were they seen as potential failure into a youth tournament they had subdued on three previous occasions? These were some of the $64,000-dollar questions that flooded the minds of many followers of the African game.

Reason for the dearth of trust was intriguingly varied.

Some argued that this Satellites team do not play the ‘sexy-like’ champagne football that drew prettily romantic patterns on the pitch; whilst others assert among other things that they were goal-shy and do not get famished enough for the kill.

Many other worse things were said about the Satellites – and to some extent the ‘sweat merchant’ of the team – Abdul Karim Zito, whose tactical acumen was brought into question by the cavillers during the successful sub-regional tournament held in Benin.

But there were positives about the team which many did not know – or may not have taken notice of.

What was, perhaps, limpidly evident was the fact that the present Satellites were not as flamboyant in terms of skill and flair as their predecessors of 2009 led by Andre Dede Ayew. Heartily, they make up for that deficiency with individual brilliance, plenty of fighting spirit – a never-giving-up spirit, a spirit that is ready to die on the battlefield rather than surrender!

And, that patently manifested in the just-ended tournament in Mauritania, where they went, saw and conquered to the amazement of all. It was the nation’s fourth conquest at the youth level, following victories in 1993, 1999 and 2009.

However, the stunningly sweet aspect of the Mauritania 2021 victory was not the defeat of Cameroon at the quarter final stage on penalties – nor the 2-0 win over Uganda’s Hippos at the grand final; it was rather the triumph over Gambia’s Young Scorpions at the semi-finals.

As you are already aware, the Satellites were forced to finish as third-best placed team in Group C, after losing 1-2 to Gambia in the final group game. Though not all-too unexpected, it still came as shock to many –  the Ghanaians having thundered Tanzania 4-0 before holding off an imposing Morocco side to a barren game.

A good team is seen in its supreme ability to resurrect from ashes to victory. To lose to a team at the group stage and bounce back to serve revenge cold, is simply a mark of greatness!

It is a shame to think that this doughty-charactered team of purpose would not have the opportunity to represent Ghana at the global stage, due to the rampaging Covid-19 pandemic that has led to the cancellation of the tournament.

We would have loved to see whether these generation could clinch Ghana its second FIFA Under-20 World Cup, after the historic feat was chalked by Dede Ayew and his boys in Egypt, 2009. Significantly, Ghana remains the only African country to have won this world title.

Whilst we commend the Satellites, its handlers and the management team for the success story, we urge them not to rest on their oars but use this achievement as springboard to a much bigger feat in the future.

Ghana will be hosting the 2023 multi-sport African Games and it is expected that the Daniel Barnieh Afriyie-led Satellites team would form the fulcrum of our football representatives.

Once again, we salute our gallant heroes. Big salute for them!