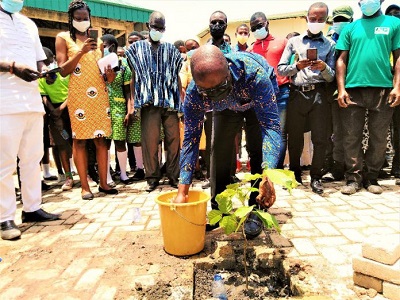 The mission statement of the Kumasi Metropolitan Assembly (KMA) is aimed at “keeping the city clean and healthy by the provision and delivery of effective and efficient waste collection services and programmes, and environmentally accepted disposal.”

Among others, KMA is supposed to provide conveniently situated refuse disposal points, all in the name of proper sanitation without which the health of its population is at risk.

It is in view of these that when MrOsei- Assibey- Antwi, assumed office as the Chief Executive of the KMA, in March 2017,all eyes were on him to create an enabling environment for development and healthy living.

In fact, he took office at the time Kumasi metropolis had been engulfed in filth. There were mountains of refuse at vintage points in the metropolis much to the dismay of residents who were expecting a lot from his leadership to help ensure proper sanitation of the metropolis and its environs.

Some residents had, even taken the law onto themselves to do their own thing at the expense of the beauty of the once touted “Garden City of West Africa”.

Bringing sanity to the Kumasi metropolis, would demand leadership with strong and bold decisions coupled with measures and action plans devoid of politics.

It is quite interesting to note that, the dynamism employed by the Chief Executive saw Kumasi, the second largest city in Ghana, named among the top 15 cleanest cities in Africa in 2020, according to a ranking which considers cities which prioritise cleanliness and solid waste collection.

Kumasi occupied the 12th position after Accra the national capital placed third on the list topped by Kigali, the capital of Rwanda.

Over the years the KMA had followed some sustainable strategies and a series of activities in the area of solid waste collection including the provision of the door-to-door and communal waste collection services.

Defending the ranking, MrAssibey-Antwi said the KMA took steps to regularise the operations of tricycles (Aboboyaa) to further improve solid waste collection within the metropolis by identifying these service providers through colours and registering them with serial numbers to ensure the effective use of Personal Protective Equipment (PPE) at all times and to ensure that all tricycles filled with waste were covered with nets to avoid spillage.

His leadership style has brought improvement also in the private sector participation by regularising the solid waste collection contracts and procuring solid waste containers to be placed at the communal collection sites to maintain its position on the continent.

A number of communal collection sites were improved through the provision of skip pads with roofing under the partnership with private waste companies in the provision of trucks and bins to enable the Assembly carry out its house-to-house refuse collection.

In line with the President’s vision of making Ghana clean and the Assembly’s own mandate of providing a conducive environment for the inhabitants and businesses, the Assibey-Antwi led administration launched the, “Keep Kumasi Clean and Green Project”, with the aim of restoring Kumasi to its past glory of “Garden City”.

The project saw the planting of hundreds of seedlings of different species at various locations and the installation of hundreds of bins at vantage points within the Central Business District.

Recognising that effective waste management does not only entail storage, collection and transportation of waste but also providing the appropriate place for proper disposal or reuse of the waste materials, KMA  under the leadership of MrAssibey- Antwi, single handedly managed the Landfill when the Contractor, J. Stanley Owusu Limited vacated the site due to non-payment by devising a means of ensuring that things were properly managed within limited resources by procuring a landfill dozer and communal containers under the Ghana Urban Management Pilot Project.

It was as a result of  the measures effectively put in place that the KMA was, in 2019, adjudged the best Liquid Waste Management Strategy in Ghana, in a Sanitation Challenge or competition organised by the Ministry of Sanitation and Water Resources, with support from foreign partners which about 139 other Metropolitan, Municipal and District Assemblies (MMDAs) across the country participated.

The remarkable feat came with an award of 400,000.00 Pounds Sterling in a competition which was geared towards bringing transformational change to the city.

With financial support from the Sanitation Challenge for Ghana, the KMA  implemented a number of projects and programmes to improve liquid waste management in the metropolis.

The project strengthened the enforcement of sanitation bye-laws and provision of logistical support, procurement and distribution of 15 motorbikes to all the Sub-Metro Environmental Health and Sanitation Units to facilitate their movements to the communities.

Under this package, the Assembly improved the Liquid Waste Stabilisation Pond at the Oti Landfill Site through the desilting of ponds and storm drains, construction of concrete platform and headworks for direct discharge, installation of coupling hoses and gravelling of kilometre haul area to the site.

Additionally, the Assembly constructed a one kilometre fence wall around the AsafoCentralised Sewer System to halt encroachment by slum dwellers and auto-mechanics.

There is no doubt that waste management that remained the greatest headache of the Assembly, has now been  reduced to the barest minimum and the rate at which the citizenry flouted environmental-sanitation bye-laws, has also gone down.

A close view of the sanitation success story of the Assibey- Antwi led KMA can be underlined by the organisation of periodic health education programmes in churches, schools, lorry terminals, mosques, radio stations and routine house-to-house inspections through the Environmental Health and Sanitation Unit of the Assembly.

It is, therefore, very important for the sustainability of the sanitation success story as Kumasi desreves to be clean and healthy. Whoever takes over should bear in mind the improvement of sanitation in the metropolis.

For cleanliness, they say, is next to Godliness; and Kumasi deserves the best.