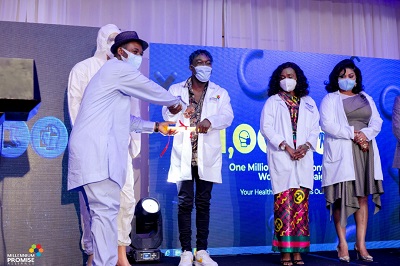 Some influential individuals have been unveiled by the Millennium Promise Alliance (MPA), Ghana to lead a campaign to raise funds to procure Personal Protective Equipment (PPE) for frontline health workers.

The campaign dubbed, “1Million PPE for Frontline Health Workers” is in collaboration with the Ghana Health Service and other stakeholders in the health sector.

In line with this, MPA unveiled ambassadors to lead the campaign, at a ceremony at Marriot Hotel in Accra on Tuesday.

They will help raise funds through short codes, mobile money, and other platforms.

The founder and chairperson of MPA and Special Advisor to United Nations Secretary- General, Professor Jeffrey Sachs  in a keynote address via video meeting platform, Zoom, said, he was proud about what Ghana had accomplished in the fight against COVID-19.

According to him, “he lives in a country which has not properly dealt with the menace, unlike Ghana which has successfully mitigated the effect of the virus on the lives of people and the economy.”

He paid a glowing tribute to the frontline workers in the country for their tremendous effort in combating the virus.

He added that the initiative was a campaign for One million PPE to help keep Ghana safe, and that the critical role of professionals who worked on the frontline, needed to have the right protective gears to protect themselves and by extension the entire society.

He was optimistic that with the support of government, relevant stakeholders, and some influencers among others, the battle would be won.

Executive Director of MPA, Chief Nat Ebo Nsarko, welcoming the guests said “we are in unprecedented times, which need unprecedented measures to address the lapses caused by COVID-19.”

He said, inasmuch as everyone in the country needed protection, the frontline workers needed it most, as they offered to offer their services and lives to protect the rest of the nation.

Chief Nat Nsarko indicated that Amnesty International released some statistics pointing to the fact that many health workers had succumbed to the virus, in their quest to save lives.

“Recently, the Minister of Health and some government officials were not spared, in all I would like to congratulate the government of Ghana on the right measures put in place to swiftly deal with the situation,” he said.

Presidential Advisor on Health, Dr Nsiah Asare, commended the MPA for its initiative in augmenting the government’s effort in the fight against COVID-19.

He said the campaign needed the support of every Ghanaian, and for that reason called on every stakeholder to give it the maximum support for the benefit of the country.

The campaign ambassadors in expressing their appreciation said, it would have been a different story if the frontline health workers had locked themselves in the midst of the situation for fear of contracting the virus.

They said the bold effort of the frontline health workers amidst resource constraints was commendable, and for that matter saw their appointments as an honour to serve the nation and they called on the public to contribute their quota to save the frontline workers by contributing to the fund raising.

Sample PPE were donated to some frontline health workers by MPA.

Have you ‘seen’ your breasts today?