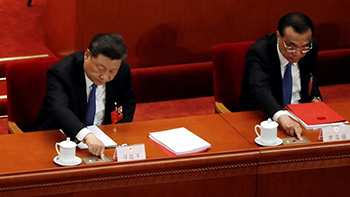 China’s parliament has approved a decision to move forward with national security legislation for Hong Kong that critics fear could undermine the city’s autonomy.

The National People’s Congress on Thursday voted 2,878 to 1 in favour of the decision to empower its standing committee to draft the legislation, with six abstentions.

The people gathered in the Great Hall of the People burst into sustained applause when the vote tally was projected onto screens.

China says the new law will be aimed at tackling secession, subversion, terrorism and foreign interference in the city but the plan, unveiled in Beijing last week, triggered the first big protests in Hong Kong for months.

It will alter the territory’s mini-constitution, or Basic Law, to require its government to enforce measures to be decided later by Chinese leaders. The plans have prompted widespread condemnation and strained China’s relations with the United States and Britain.

Al Jazeera’s Katrina Yu, reporting from Beijing, said the Chinese move “is taking place without any consultation, any debate with Hong Kong’s leaders or its government”.

Details of the law are expected to be drawn up in coming weeks, and Chinese authorities and the Beijing-backed government in Hong Kong say there is no threat to the city’s autonomy and the new security law will be tightly focused.

But the US on Wednesday revoked its special status for Hong Kong, alleging the city was no longer autonomous from Beijing, paving the way for future sanctions and the removal of trading privileges in the financial hub.

Meanwhile, in Hong Kong, riot police were out in force as its legislators debated another piece of legislation, a bill that would criminalise disrespect of China’s national anthem.

Last year, the city was rocked for months by often violent pro-democracy demonstrations over an unsuccessful bid to introduce an extradition law to China.