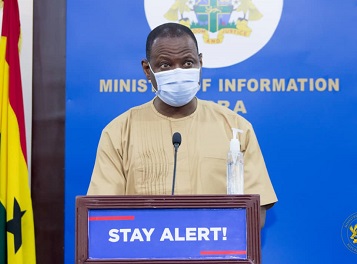 With the surge in coronavirus (COVID-19) infections in the country, the Upper West Regional Health Promotion Officer, Mr John Maakpe has called on residents to suspend the act of converging at joints to share drinks such as pito and a local tea called “ataya”.

The officer noted with concern the blatant disregard for the safety protocols at the joints which were made up of mostly males of the same age or interest groups, who normally drank together and talked for long hours before retiring to their respective homes for the night.

“These are people coming from different areas although you meet every day but you are not sure where they had been before the meeting. These are critical times where we need to do away with things that are not very crucial and save our lives,” he said.

Mr Maakpe who stated this in an interview with “The Spectator” at Wa said it was time to break the pito and ataya camps for now and reconvene after the disease was brought under control.

Ataya is a Senegalese term for the Chinese Gunpowder green tea leaves boiled for 20 minutes and is believed to make men more potent whilst pito is a local drink brewed from millet; both of which are enjoyed by natives of the region depending on their religious inclination.

The practice has been that males numbering about five, converge at a point, sometimes in camps to drink the ‘ataya’ which is mostly boiled and served in small silver cups owned by the group or camp for that purpose amidst long conversations or discussions.

The pito on the other hand, is mostly prepared for sale and customers buy and enjoy in calabashes belonging to the pito vendor.

Mr Maakpe raised concern about the use or sharing of cup or calabashes which had been used by another person to serve someone else without proper washing as well as the removal of the nose mask before drinking in continuous conversation and sitting  close to one other in a circle.

“Social distancing does not work at such joints, the pito is sometimes better because it is not every time people gather at the place but the ataya seems to be a daily routine for some people and they do not wear nose masks because of the drinking but talk endlessly”, he said, and advised lovers of pito to buy the drink in gallons and take home.

Speaking about other areas of concern, Mr Maakpe said some traders at the market who were at a higher risk of contracting the virus had also refused to wear their nose masks in spite of the intensive education the regional health directorate had given them.

“Sometimes when they see you coming, they put on the masks but take them off after you are gone and this is quite uncalled for,” he stressed.

He reminded Christians and their Muslim counterpart to observe social distancing in the churches and at mosques,

“Even though we are there to worship, we can still take the virus home if we are not careful, so we have to observe the protocols as the scripture says “obedience is better than sacrifice,” he added.