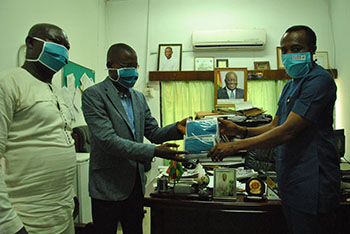 The Coastal Development Authority (CoDA) has donated 200 nose masks and 100 hand sanitisers to the New Times Corporation (NTC), publishers of Ghanaian Times and The Spectator, in support of efforts to curb the spread of the coronavirus (COVID-19).

Additionally, the Authority is to provide vendors of the company within the coastal zone with some of the products to protect them from being infected with the disease.

As an agency helping to fight the spread of the virus in the country, he said, CoDA appreciates the role the media had played in sensitising the populace on the measures already announced by the government to stop the spread of coronavirus.

“The fight against this disease does not solely rely on the government and institutions in the country. We cannot do this alone as an agency. We need all of you and that is why we appreciate the work the media is doing in this fight. You have been supportive and we really appreciate it,” he stated.

Mr Shaib singled out Ghanaian Times for praise for its campaign on nose or face masks wearing as one of the protocols to prevent the spread of the disease stating that “your publication has given relevance to what we are currently doing including donation of sanitary items and nose masks to fight COVID-19.”

CoDA, he said, would continue to remain a true partner to the NTC to further the country’s development agenda.

Editor of Ghanaian Times, Dave Agbenu, who received the items, expressed gratitude to CoDA for the gesture saying that the donation would be an added boost to the company which had been at the forefront of the fight against the disease.

He said NTC, through its publications, intensified its campaign on nose mask wearing to create awareness on the effective use of the product to stop the spread of the virus.

“Our work here is a public service. We commenced this campaign to educate the public on the importance of wearing nose mask and how it could be done properly. This is our contribution to the fight against COVID-19 and we will continue until this ‘new enemy’ is defeated,” he stated.

The Ghanaian Times, he said, would not renege on its core mission to provide the platform for people to voice their opinions and ideas and help build the country.