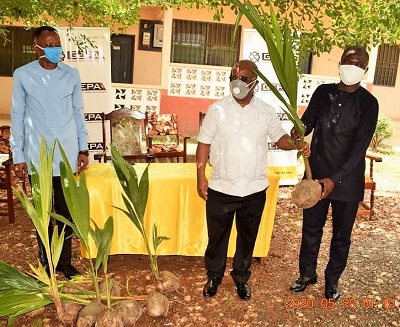 The Coconut Revitalisation Programme (CRP) was launched in Ho last Wednesday with the distribution 26,416 coconut seedlings to producers of the fruit in five districts and municipalities in the Volta Region.

The beneficiaries are from the Afadzato South, Ho West and Adaklu districts.

The rest are from the Ketu North and Ketu South municipalities.

The programme, which is under the supervision of the Ghana Export Promotion Authority (GEPA), is meant to promote the cultivation of coconut in those areas, not only for domestic consumption but more importantly for export.

The Volta Regional Minister, Dr Archibald Yao Letsa, who launched the programme, assured coconut growers of good returns for the venture, saying the cultivation and sale of coconut had become a lucrative business for the farmers and others in the value chain in recent times.

“The exportation of the raw coconut and the processed products has been identified as another viable source of foreign income for our dear nation,” he added.

Apart from that, Dr Letsa stated that the CRP fell in line with the Planting for Food and Jobs, and Planting for Export and Rural Development initiatives.

Therefore, the Regional Minister urged farmers to embrace the CRP to reap the guaranteed benefits of good income.

Earlier, the Regional Officer of GEPA, Mr Hope Amrado said that coconut had been identified as one of the vital non-traditional crops that had bright and reassuring prospects for export.

He gave the assurance that the GEPA would also collaborate vigorously with the Department of Agriculture to provide coconut producers with the appropriate support for the success of the programme.

To ensure the success of the CRP, he said that the beneficiary farmers would sign an undertaking, pledging the proper use of the seedlings.