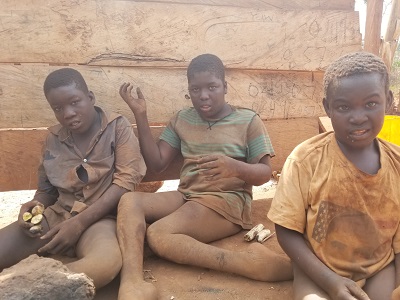 The disabilityof three siblings at Asanteasua at DuayawNkwanta in the Bono Region has become a worry to their parents for the past yearsas all attempts to get them cured had failed.

Though some townfolks had linked their predicament to the consumption of some “forbidden fish” by their parents, their mother, Madam Adjoa Florence has, however, denied the claims.

According to her, she had never consumed any fish her husband caught from a river in the area for the river god called, Apaape, to have cursed her children.

She maintained giving birth to healthy children but a very strange disease attacked three of her children namely, AkwasiAgyei, 27, KwakuAmoah, 18, and AmaHenewaa, 16.

Consumption of fish from the river at Asanteasua is a taboo that is why some people in the villlage had attributed the disability of the three to possible consumption of fish caught from it (river) by their parents.

Their sad state is making life difficult for the parents, especially the mother, as the 81 year old father is having sight and speech problem.

Apart from KwakuAmoah who wobbles  with difficulties, the other two have been crawling.
With the exception of AmaHenewaa, who can only mention “Maa” in her effort to call the mother, the other two cannot speak at all.

In a chat with their mother, Adjoa Florence,46, she said that she had given birth to eight children(three boys and five girls) including the three, with the eldest, a male, being 27 years.

According to her, the three were not born with the ailment and it came as a surprise to her how they became paralysed.

She said during pregnancy, she attended antenatal care at the Saint John of God Hospital at DuayawNkwanta and after birth, she took them for weighing and they were very healthy but suddenly they became paralysed,one after the other.

She said she took them to the Hospital where medical experts carried out series of tests on them but to no avail.

They are bathed, fed, among other things by the mother who said the family faced strong stigmatisation from members of the community due to the condition of her children.

She said the community had labelled the plight of the children as a curse and did not want to associate with the family.

Responding to the taboo,madam Florence denied ever fishing from the river, saying she was already aware of such a prohibition.

The husband, Agya Kofi Agyei, could not say anything as he had speech impairment in addition to sight problem, with Madam Florence saying that his plight also came as a surprise to her.

When contacted, Nana OpokuBinsere, the high priest of the river god, alleged the father was the cause of the plight of the children as he  ignored several warnings not to fish in the river.

He explained that a visitor who did not have any knowledge about the taboo would be spared for fishing in the river, “but if you know and do it,then the punishment will follow”.

“It is a pity that the children are suffering because of the wrongdoing of the father”, Nana Binsere claimed.

Meanwhile, the mother has appealed to Non-Governmental Organisations such as the World Vision, philanthropists, to come to the aid of the children and help improve their situation.