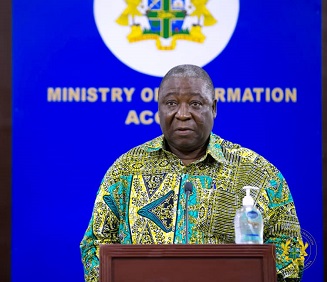 A number of the 230 Ghanaians who returned from Kuwait last weekend have tested positive for COVID-19, according to the Ghana Health Service (GHS).

The Director of Public Health of the service, Dr Badu Sarkodie who disclosed this at the COVID-19 press briefing in Accra yesterday, fell short of mentioning how many of them were infected but said the service was following up on the test.

“We are following up on the test. We have not finished with all the people they took samples from. There are indications that some of them are positive. We will follow up on these and when the reports are ready, we will share them”, he said.

This disclosure comes less than a week after the Director for Media and Communication for operation COVID-19 Safety, Osei Bonsu Dickson, in a news report upon their arrival said all of them had tested negative to the virus following a test before their departure to Ghana.

“They needed to be taken through serological test, and that took place in Kuwait and all of them tested negative”, he reportedly said, adding that they would be tested again when quarantined.

The deportees arrived on Saturday from the Gulf State, where they lived illegally until the Kuwait government, in consultation with their Ghanaian counterparts, agreed to deport them via a chartered flight.

Information Minister Kojo Oppong Nkrumah told journalists last week that government granted a special permit in their admission in line with immigration and health regulations to prevent a threat to the Ghanaian population.

The deportation came at a time when the country’s borders remained closed to human travel as part of international travel restrictions under Ghana’s COVID-19 Response Programme to avert the importation of the disease.

They were the first batch of Ghanaians resident abroad who had applied to be brought back home following international border restrictions to contain the pandemic.

Asked to confirm that some members of parliaments had tested positive for the virus following their mandatory testing, Dr Sarkodie said he did not have official information on the matter.