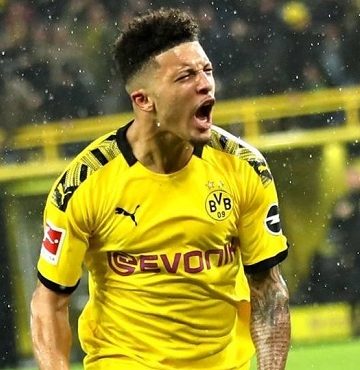 Manchester United are leading the race to sign Jadon Sancho.

However, Borussia Dortmund will demand £115m for the England international this summer. Red Devils chief Ed Woodward has made the winger their No. 1 transfer target.

United are said to be willing to give Sancho the iconic No. 7 shirt at Old Trafford.And according to the Telegraph, United are leading the race to sign the 20-year-old.

However, Dortmund will demand a Premier League record £115m for the attacker.

It is claimed United are worried about committing to a record deal due to the coronavirus pandemic and the affect it will have on club funds.

Woodward and co will only press ahead with plans when games return and they know what players are available.

Chelsea and Real Madrid have also been credited with interest in Sancho. However, United are the frontrunners to sign the ex-Manchester City ace.

A lot has been made of United’s interest in Sancho, with ex-Premier League act Danny Mills claiming the forward should be wary of heading to Old Trafford.

“If I was Jadon Sancho I’d be wanting to ask the questions: ‘Who else are you bringing in?’” Mills said.

“What other signings have you got lined up? What is the squad going to look like next season? Are you realistically going to be challenging for things?’

“‘Who is going to be the manager? Is it still going to be Ole Gunnar Solskjaer next season?’

“He’s in a position of strength at the moment. He wants to go and win things, that’s the most important thing.

“There’s no point going to Manchester United next season if they’re going to finish sixth or seventh.”

United are back in action next Friday when Premier League action returns after the coronavirus pandemic.

The Red Devils will face Tottenham on Friday night. – Express.co.uk