Ease, but with caution 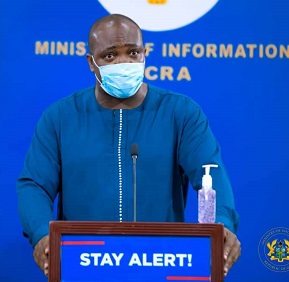 The easing of restrictions over the coronavirus (COVID-19) pandemic may be coming to many as pleasant news, especially for the 15 non-contact sports disciplines but obviously not for the others; football, chiefly.

Tension and anxiety preceded Sunday’s announcement of the restriction review by the President, Nana Addo Dankwa Akufo-Addo as individuals and organizations waited for the next move as people get fed up with days, weeks and months of inactivity.

Of the ‘hottest’ breed of athletes yearning to know their fate was footballers and their ‘football people’ who are the worse hit by the pandemic as far as the diseases’ impact on sports was concerned.

But football, an epitome of a team event, was ‘swerved’ and has to wait until June 31 when the current restriction expires.

A few concerns have, however, been expressed over some of the disciplines labeled as non-contact sports because of their nature, especially with golf and tennis but with a strict adherence of the safety protocols, those concerns can be addressed.

But can the ‘football people’ make any case for themselves considering the challenges and logistical issues they are likely to face?

The response will surely be unenthusiastic and very unconstructive considering their financial plight and would prefer to wait.

Obviously, a typical football game to be played behind closed-doors but aired on television could require close to 100 or more people in the stadium made up of players, technical and management team members of both teams, a few media persons, ball boys, television crew, match officials and other match day staff.

These persons must have undergone mandatory testing to ensure that no infected person gets to the arena while also ensuring that every protocol was observed to the latter.

Sometimes, it seem very simple but figures from the Ministry of Youth and Sports (MoYS) as well as the National Sports Authority (NSA) bring to the fore the heavy toll it will have on the clubs financially.

Clearly, it explains why Alhaji Karim Gruzah and his King Faisal side plus a few of the bottom clubs will be the first to commend government for the decision not to restart football now and ultimately call for the cancellation of the season.

Obviously, an annulment can save their season as they are threatened by relegation.

Yet, the reality of recording almost nothing from the gates but have to spend so much on protocols for a single game makes their claims very indisputable.

Heartily, the call to restart now or not has been a debate among the ‘football people’, sending a clear signal that the decision was for the good of all.

Of course the German Bundesliga has started and within a fortnight, about four games have been cleared.

In another two weeks, the La Liga and English Premier League (EPL) will also be restarted.

Instead of waiting for the June 31 deadline, the FA and stakeholders could be finding ways on how to go about their season when the restriction was partially eased for them.

A fine idea will be to liaise with health authorities to begin mass testing for Premier League and by extension Division One League (DOL) players, referees and their assistants, technical and management team members etc from the second or third week of the month.

In this case, teams can start training few days after the restrictions have been eased for football, otherwise the FA must listen to Aduana Stars skipper Yahaya Mohammed’s call to cancel the season and start afresh in August to synchronise with the European calendar.