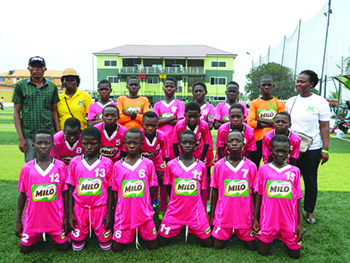 Akro Heroes FC, a juvenile and division two football franchise from Somanya in the Eastern region has merged with G.O Sports Academy under an agreement signed between the two outfits.

Under the agreement, G. O. Sports and Akro Heroes’ managements, retain 70 per cent and 30 per cent shares respectively in managing the Eastern regional branch of the Sports Academy.

The agreement effectively absorbs Akro Heroes’ division two and Under-13, 15 and 17 juvenile sides as part of the G. O. Sports brand.

According to President of G.O. Sports, Mr George Ofori, it is the utmost wish of his brand to give every young boy an educational opportunity, using football to bring young children back into the classroom.

“Aside seeking to provide a glittering future to the children through football, we’re also determined to provide them a huge opportunity to tap their talent in education as well,” he stressed.

The teams will be fed by players of the juvenile sides from the five regions.

G.O Sports currently runs four residential facilities in three regions: one each in Oti (Krachi) and Eastern (Somanya) and two in the Volta (Hlefi and Avatime Biakpa).