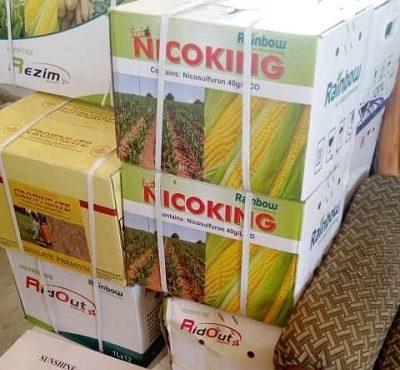 The Akanu Sector Command of the Ghana Immigration Service (GIS) last Wednesday foiled an attempt by smugglers to haul a consignment of fertilisers and agro-chemicals to Togo.

The two members of the cross-border cartel, who were conveying the items on a tricycle from Atanvi in the Ketu North municipality, using unapproved routes, absconded when the GIS personnel stopped them at appoint before they could cross into Togo.

Assistant Inspector of Immigration Felix Klu-Adjei, who is also the Officer in-charge of Public Affairs of the GIS in the Volta Region, disclosed these to the Ghanaian Times in Ho, yesterday.

He said that the contrabands included NPK fertilisers, eight bags of UREA fertilisers and 23 boxes of other chemicals.

The gangsters fled upon seeing the GIS officers arriving at the scene, according to Assistant Inspector Klu-Adjei.

He said the items and the tricycle with registration number, M-19-VR 1763, have been impounded, and a manhunt for the fugitives was underway.

Assistant Inspector Klu-Adjei warned that any individual or group, who would flout the border restriction would suffer swift and ruthless consequences.

The GIS has in recent time busted the activities of the drug cartel operating along the Ghana-Togo border.