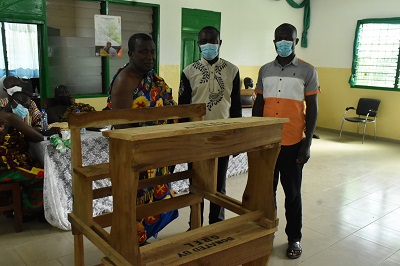 The Ghana Rubber Estates Limited (GREL), producers of raw latex for export has donated 200 dual desks to four schools within its area of operation.

The donation was done at Agona Nwanta in the Ahanta West Municipality of the Western Region recently.

The Corporate Affairs Manager of GREL, Mr Perry Acheampong said the company considered education the main pillar to any development and so the promotion of education in the catchment area and beyond was paramount to GREL as part of its Corporate Social Responsibility.

He said GREL had constructed many schools dotted all over the area even in areas they did not operate to bring education closer to the local people.

Mr Acheampong disclosed that as part of GREL’s agenda to promote education, 12 students in various tertiary institutions were awarded scholarships amounting to GHC84, 000.00 to cater for their academic and residential user fees.

He said besides education the company had constructed health facilities and staff accommodation in some communities to help them meet their health needs, adding “mechanised boreholes with overhead poly tanks have been donated to some communities too”.

always dialogue for peaceful solutions to grievances instead of running to the courts.

The Chairman of the Association of Chiefs on whose lands GREL Operates (ACLANGO), Nana Kwesi Agyeman who presented the desks to the schools also remarked that people often complained that GREL was not doing well in the areas in terms of projects.

He said GREL had built schools, community centres, drilled water for the communities, built clinics among others in most communities to make life better for the people.

He advised all rubber farmers to take their raw rubber to GREL so as to benefit from more projects in their various communities.

Nana Agyeman on behalf of the beneficiary schools thanked GREL for the support and asked the school authorities to ensure that the furniture were well used to promote teaching and learning.