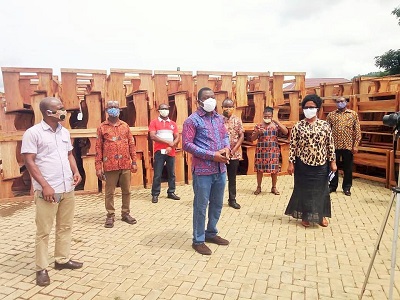 The Ho West District Assembly has handed over 600 dual-desks valued at a cost of GHC 225,000 to the District Directorate of Education (DDE), for distribution to the various basic schools in the area.

The desks in addition to four teachers’ desks, and four cardboards were produced with funds from the District Performance Assessment Tool (DPAT) to augment the shortfall of furniture in the schools.

The (DCE), Mr Ernest Apau, said during the handing-over ceremony here a fortnight ago that the Assembly was committed to quality education and would take steps to eradicate the menace of furniture shortage in schools.

The Ho West District Director of Education, Madam Catherine Korsi Agordo expressed gratitude for the items and gave the assurance that they would be shared equitably among the schools.

In another development, work on the washrooms project at the Kpedze Market, Kpedze Lorry Park Dededo Market and Vane Market are 90 per cent complete.

The DCE said that the five projects were to ensure high standards of hygiene in the district.