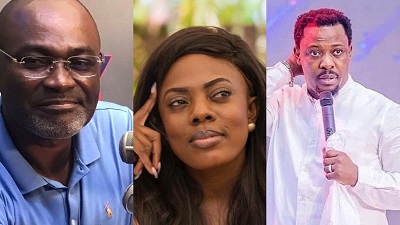 Member of Parliament Kennedy Agyapong has revealed that Prophet Nigel Gaisie faked a prophecy about Nana Aba Anamoah in order to sleep with her but failed.

The MP for Assin Central has been going after the preacher this week with allegations upon allegations.

And now, he says the preacher faked a prophecy about Nana Aba just to get her laid but the TV host’s smartness saved her.

According to Kennedy, Nigel planned a fake prophecy with his associate pastor to get Nana Aba in bed but unlike the other victims, she didn’t fall for the trap.

He has slept with aspiring MPs, actresses and radio presenters,” he said on Net2 TV on Wednesday. “The only woman I have respected is Nana Aba Anamoah.”

“He prophesied that her father had a house in Cape Coast and that he had planted gods in the house. Then he asked Nana Aba to join him to Cape Coast to destroy the gods in her father’s house but she refused to go. That is deep thinker,” he divulged.

“An associate pastor devised the plan and gave it to Nigel but it didn’t work. Other victims fell for this trap,” he concluded.