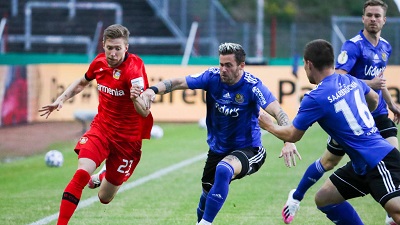 Saarbrueken’s unprecedented German Cup run came to an end at the semi-finals on Tuesday night after a 3-0 defeat at the hands of Bundesliga outfit Bayer Leverkusen.

The fourth-tier side, whose last competitive match was in March, beat top-flight clubs Cologne and Fortuna Duesseldorf on their way to becoming the first team from that level to reach the last four of the cup.

Saarbruecken coach Lukas Kwasniok had said a place in the July final at Berlin’s Olympic Stadium would be tantamount to the “rebirth of Jesus”, but there was no miracle on Tuesday.

They were comfortably dealt with by Leverkusen, who are chasing a spot in next season’s Champions League and were in the driving seat from the get go at Saarbruecken’s tiny, empty ground in southwestern Germany.

The away side were quickly two ahead thanks to goals from Moussa Diaby and Lucas Alario within the first 20 minutes.

Both were set up by Kerem Demirbay, whose pass for Diaby’s opener in particular highlighted the gulf in class between the two teams.

The hosts never recovered from that early blow, and just before the hour mark Leverkusen struck a third, with Demirbay once again the man to lay on the decisive pass for Bellarabi to smash home.

The defeat would have been heavier had Paulinho not missed several good chances to beat Saarbruecken’s impressive goalkeeper Daniel Batz, who saved five penalties in his team’s quarter-final win over Duesseldorf and made some good stops on Tuesday.

Leverkusen will now take on one of Bayern Munich or Eintracht Frankfurt, who face off at the Allianz Arena on Wednesday, in the final on July 4. – worldfootball.net