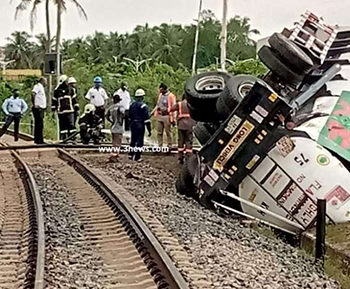 A Ghana Railway Company Limited locomotive engine, on Wednesday morning crashed into a GOIL fuel tanker at the rail crossing, near Takoradi Container Terminal  (TACOTEL) on the Sekondi-Takoradi road, in the Western Region.

The incident caused spillage of huge volumes of diesel fuel into the neighbourhood in New Takoradi.

The Crime Officer at the Marine Police in Takoradi, Assistant Superintendent of Police (ASP) Solomon Debi, who confirmed the story to the Ghanaian Times, said the  driver of the tanker, Mohammed Abubakar, 48, had been arrested.

He, however, said  the locomotive driver is being sought to assist police in investigations.

ASP Debi said, “We are investigating the matter. The tanker driver claimed his engine suddenly ceased, that’s why the tanker stopped all of a sudden on the rail line. He said he got down and was stopping the locomotive engine, but, it couldn’t stop.”

Eyewitnesses narrated that the bulk road vehicle with registration number AW 2705-11, loaded with diesel stopped on the rail tracks due to engine failure.

He said the locomotive engine emerged from the Railway headquarters in Takoradi and on getting to the scene could not stop and run into the truck and overturned It.”

Ghanaian Times was told that the automatic signaling system at the level crossing was not functioning at the time of the crash.

The locomotive engine that emerged from the harbour enroute to Kojokrom, crashed and grazed that tanker causing huge damage.

“The driver and the mate of the tanker escaped unhurt while the locomotive engine continued gliding to Kojokrom,” Charles Egyir, an eyewitness recalled.

Another eyewitness recalled, the timely arrival of police crash team and  deployment  of five fire tenders  to the scene prevented  what could  have become another explosive situation  in the Sekondi-Takoradi metropolis,  following the Apollo junction gas explosion, some few weeks ago.

He said “they quickly spread the diesel tanker with foam powder to avoid any combustion and explosion and in about two hours the situation had been controlled”.

Meanwhile, the crash team had towed the head of the fuel tanker to allow traffic flow on the Sekondi-Takoradi road.