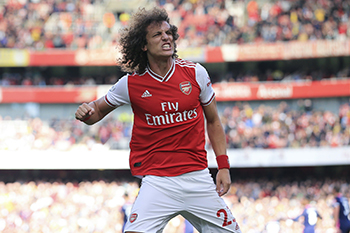 David Luiz’s brief spell at Arsenal could be coming to an end with the Brazilian out of contract next month and no negotiations over a new deal planned.

It was widely reported Luiz arrived in north London on a two-year deal, but Sky Sports News has learned the agreement was only for an initial 12-month stay.

After last summer’s significant investment in the first-team squad, including the club-record signing of Nicolas Pepe, Arsenal are expected to restrict spending. A lack of Champions League income and the global coronavirus pandemic are also factors.

Mikel Arteta has repeatedly sung Luiz’s praises since replacing Unai Emery as head coach in December and is understood to be desperate to keep him, as is the Gunners’ technical director Edu.

Luiz is also keen to stay at Arsenal and has told friends he wants to remain in London.

He has benefitted from Arteta’s appointment; despite having seven central defenders to choose from, the Spaniard has picked Luiz for 14 of the 15 games he’s managed to date.

However, earlier this month he gave a clue to the where his future may lie, telling Brazilian television network SporTV: “I always said that I would like to end my career at Benfica.

“I love Benfica. My dream is to step on the pitch of Estadio da Luz in their colours.”

Premier League clubs are allowed to enter into short-term contract extensions with players whose current deals expire on June 30.

There was concern about the status of players whose deals elapsed at the end of June, with the season set to extend into August due to the coronavirus pandemic.

But a Premier League statement earlier this month read: “It was agreed by all shareholders that clubs and players can mutually agree to extend their contracts beyond June 30 until the end of the season.”

Clubs and players have until June 23 to agree extensions.

Arsenal’s summer could be an interesting one. Head coach Arteta has only been in charge of 15 games – not a great deal of time to assess his squad. What is clear, though, is Arsenal – like many other clubs – will have a limited transfer budget.

They committed over £160m under Emery last summer, and face the prospect of a fourth consecutive season in the Europa League – not to mention the impact the coronavirus pandemic has had on finances. – Sky Sports