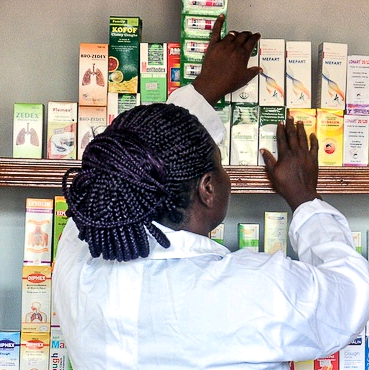 Following the surge in COVID-19 cases in the country, some Ghanaians have aggressively resorted to hydrogen peroxide which is said to be an antidote to the deadly disease by gargling.

This had created artificial shortage of the traditional oral hygiene fluid (hydrogen peroxide) at the drug stores and markets.

But the Lead Researcher on hydrogen peroxide, Rev. Emeritus Professor Andrews Seth Ayettey had warned that, its wrong use, might not yield any positive results as such users should stick to the correct measurement for the desired impact.

One of the preventive mixtures that have been discovered to help prevent the further spread of COVID-19 is the hydrogen peroxide.

Eight frontline nurses in the COVID-19 Management Team at a District Hospital in Accra who are said to have used hydrogen peroxide have not contracted the disease and had also tested negative to the disease.

According to a dependable source, the demand for hydrogen peroxide had gone high in some pharmacies as a result of the new discovery.

“Although prices haven’t changed at some reputable pharmacies like Parker Pharmacy at Korle Bu which still sells it at GH₵5.50p, the commodity is out of stock as I speak”, the source said.

However, some pharmacies, due to the high demand, have increased the price of hydrogen peroxide to GH₵12.00 which is twice the actual price, as compared with when it had not been discovered as a remedy for COVID-19.

Speaking to “The Spectator”, the source stressed that, “prices of hydrogen peroxide would continue to go high in some pharmacies, now that it has been said to be out of stock and demand is still very high”.

According to Mr Samuel Affuma, Pharmacist at Top Pill, Dzorwulu Branch, they had about 20 bottles of hydrogen peroxide on Friday, January 22, 2021 but as of Monday, January 25, 2021 everything was sold out.

He was emphatic that some enquiries he made revealed that some people drank the substance every morning upon hearing that it could cure COVID-19.

He stressed the need for the public to be educated more on the use of hydrogen peroxide especially on the television to avoid any complications because people were drinking the mixture instead of gargling and that this was very dangerous.