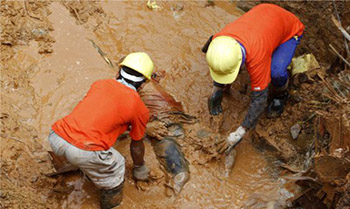 The police at Ntortroso in the Ahafo Region, yesterday arrested a watchdog committee member, for allegedly stabbing to death, a 48-year-old man, for engaging in illegal mining, popularly known as galamsey,.

The suspect, Kofi Aseidu, allegedly stabbed John Sarfo, also known as (aka) Nigerian man, to death at galamsay site at Ntortroso during a confrontation.

The body of the deceased has been deposited at St Elizabeth’s Hospital at Hwidiem, pending investigation and autopsy while Aseidu was in police custody.

According to an eyewitness, Kwadwo Bright, who spoke to the Ghanaian Times, Sarfo, went to the site to engage in illegal mining in the company of other colleagues, in night, but were confronted by members of the watchdog committee.

The eyewitness said in an attempt to confiscate items being used for the galamseyers, Sarfo was stabbed by Asiedu making him unconscious.

The youth attempted to go on rampage in solidarity with their colleagues.

The Omanhene of the Ntotoroso Traditional Council, Barima Twereko Ampem III, appealed to the people to remain calm, while police investigated the circumstances that led to the stabbing.

He said the watchdog committee was instructed by leaders of the town to put an end to galamsay that was destroying the environment, and described the incident as unfortunate.

A source from the police at Ntortroso confirmed the story to the Ghanaian Times, but did not give details, saying investigations were ongoing.