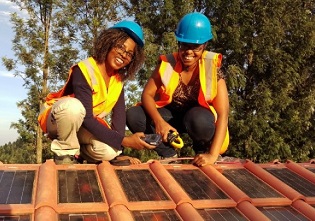 Alongside six partner organisations, DMWA has joined the campaign to increase the total number of signatories to 144, including 118 organisations, 13 partners and 13 governments.

The organisation said it wants to encourage its clients and partners to “have a strong inclusive agenda, which will facilitate women’s involvement in the energy industry”.

According to the Peterson Institute for International Economics, increasing the number of women in leadership positions from 0 to 30 per cent translates to a 15 per cent boost in profits.

A study, conducted in 2015 by the McKinsey Global Institute, emphasised the essence of taking steps to advance greater equality for women, such as employing more women in technology and boosting women’s participation in the workforce.

It noted that the world could add $12 trillion to its economy by 2026, hence the need for public, private, and social sectors to close gender gaps in work and society.

Sebastian Wagner, Managing Partner at DMWA Resources described the move as “a unique position to bring women on board decisively, as investors or creators of opportunities to invest in”.

“We’re really proud to become signatory today and firmly believe that any sound investment must be one that has women on board.

“Our core focus is on creating long-term value to benefit ourselves, our partners, host countries and their citizens. We are certain that this cannot be achieved without women’s participation,” he added.

Endorsement of the ‘Equal by 30’ campaign implies DMWA Resources is committed to offering a safe, transparent, respectful and inclusive work environment and attractive opportunities for development for all its staff, including women.

The organisation said it would “provide training opportunities to all employees to avoid toxic or misogynistic working environments, so that its workplaces are free of harassment, violence and bullying behaviours”.

Among several other commitments, the energy marketing company added that it would attract women in all departments and aim for approximately 50 per cent representation of women across all levels, including leadership teams and at board level, by the year 2030.

“We commit to providing career progression opportunities as well as backing investments led by women and which will encourage women’s participation in the energy industry,” the company noted.

The ‘Equal by 30’ campaign is a joint initiative of the Clean Energy, Education and Empowerment Initiative which works to advance the participation of women in the clean energy transition and to close the gender gap.

‘Equal by 30’ is led and based at Natural Resources Canada, a division of the Government of Canada.