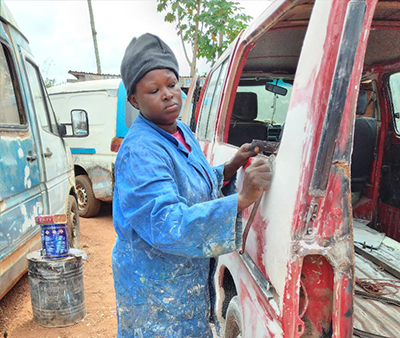 The limited job opportunities in the world is fast eroding the notion that some professions are the preserve of men.
It is interesting to note that, women have ventured into more daring professions to prove a point that what men can do, women are capable of doing.
By dint of hard work and perseverance, women have turned engineers, medical doctors, painters, exquisite artists, renowned academicians, bus drivers, pilots and top-notch professionals among others.
Following the example of such women, 28-year-old Ms Prinsca Akorfa Godoh, a native of Ve Gbordome in the Volta Region who had developed a passion for auto spraying, enrolled at the Xorlali Spraying Shop at Adentan, Accra to learn the trade.
Ms Godoh said her mother readily gave her blessings when she sought her consent to learn the trade. “If that is what you intend to do, then l have no objection,” she said.
According to Ms Godoh, the man from whom she learnt the trade encouraged her to remain focused on the job because there was a lady apprentice who had enrolled and was doing pretty well before she joined.
She admitted that, though the trade looked very simple and attractive, learning it was not as easy as one would have thought. The task to sandpaper a car was one of the most difficult aspects of the trade which nearly put her off.
Ms Godoh described how an automobile sprayer has to apply filler paste on the rugged surfaces of a car, sandpaper it after which putty was applied.
She said the application of putty at this stage of the work was basically to help fill the minor holes which were left on the car.
She explained that different sizes of sandpaper were used at different stages of the preparation process to make the final spraying look smooth and nice.
Having finished this stage, the car would be washed to clean dust that might have percolated on it. The sprayer would then go ahead to cover parts of the car, which were made of glass and rubber with paper to make way for the first spraying.
Ms Godoh said the car would be checked again to find out if there were any potholes left and fill them before the final spraying would be carried out.
She said she was surprised about the high commendation she received after the successful completion of her first spraying job. The car owner was exceedingly glad about the professional touch she had applied to her work.
Apprenticeship
The young sprayer intimated that she commenced her apprenticeship in 2008 when she was only 16 years old.
Ms Godoh said she completed her apprenticeship after three- and-a – half years, opened a shop at Frafraha on the Adentan -Dodowa road, and has since trained three people, while two apprentices are under training.
Diversification
“Unlike the sale of food which demands that people should purchase every day, my work does not follow in that line. There are times that the job comes in series and there are times that one becomes idle with no work to be done,” she said.
Being innovative in her approach to work and ever ready to seize any opportunity whenever possible, Ms Prinsca Godoh has opened a shop where she sells paints for spraying cars, but ends up using the paints more for her work.
She said she had added the sale of cooked rice, beans, banku and akple to occupy herself whenever there was no job.
Plans
Ms Godoh said her desire was to own a spraying booth where quality spraying or good work would be done. She said quality product was that which kept many renowned entrepreneurs in business over the years.
Additionally, she would like to train more capable hands to be in charge of the job while she stepped back to assume a supervisory role in the future.
Her advice to the youth especially the girls, is that, they should try their hands on other jobs and work hard to achieve heights their intellect would permit them.
Education
Although Prinsca completed the Vedeme Local Authority Elementary School, she could not continue her education because she lost her father when she was a baby. Unfortunately, her mother, a single parent, could not support her.
Social Life
Prinsca who is the third and last child of her parents, attends the Pentecost Church, Adentan, Ewe Assembly and she is devoted to serving God.
Her hobbies include cooking, doing household chores, dancing and listening to good music. She likes boiled rice with cabbage stew.