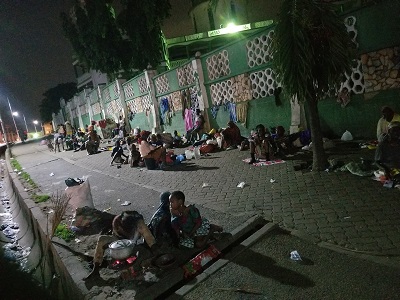 A female migrant from Niger who was looking for a place to lodge at the Central Mosque at Aknatialine, Kumasi, threw decency to the wind and attacked one of   the elders from the Zongo Community who she considered a stumbling block to her cause.

This nearly disturbed the relative peace in the area.

The migrant, whose name was not readily available, went to the Central Mosque last Friday with her belongings to look for a place of stay for a while as her colleagues do when they come to Ghana.

The migrant’s anger however reached its peak when the elder, Mallam Gariba Bolga approached her and said that there was no accommodation for her in the premises of the Central mosque as all the female migrants who lodged in the place earlier had already been driven away.

That did not go down well with the woman who fiercely pounced on the elder, pinned him down, amid insults.

The incident happened in the presence of The Spectator Reporter at about 8:30pm, when he saw lot of the youth trooping to the scene.

”Had it not been because the woman was carrying a little child on her back, the youth would have subjected her to severe beatings, though she was not spared some knocks for pouncing on the old man.”

“Allah, she was very fortunate she had a baby, she would have been taught a lesson,” a barber, Sky B, told this reporter.

Some residents of Akwatialine, particularly those close to the Central Mosque had always lived in anxiety following the influx of the migrants from Niger in the wake of the spread of COVID -19.

The number of migrants keeps soaring every day and residents doubted whether they had been tested against the COVID-19.

Niger is bordered by Libya in the North, Benin and Nigeria in the South, Burkina Faso in Southeast, Mali in the West and Chad in the East.

With the closure of the Nigerian border, it is possible for the migrants to come to Ghana through Burkina Faso and the question many of the residents are asking is whether they were tested for COVID-19 before entering.

Residents’ anxiety stemmed from a recent video that went viral on social media of foreigners entering the border at Paga with no official attending to them.

The migrants, mostly women, some nursing mothers and children aged between three and four, “hijacked” the walkway leading to the entrance of the Central Mosque, which they turned into a “kitchen” and a “bathroom”, especially in the evening.

It was in view of this that the elders and opinion leaders decided to sack them from the place.

”They are here in Kumasi as beggars and they are seen mostly “doing serious business” along the Amakom traffic light begging for alms, said a resident.

It is recalled that a sister paper, the Ghanaian Times, in its August 2, 2019 edition, carried a similar story titled, “Migrants Take over Walkway to Kumasi Central Mosque”.

In fact, from 4:30 pm throughout the night, the place was very busy as cooking and washing of clothes and bathing of little children became the order of the day, while they used the porches of the stores close to the mosque as their “bedrooms”.

They wash their clothes and hang them on the fence wall of the mosque.
Earlier, in a chat with some of them, who declined to mention their names, they claimed Ghanaians are religious, easily give alms, and would not harm them.