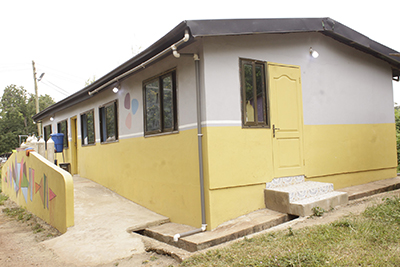 The Director of Dakah Analytica and DA Foundation, Dodzi Koku Hattoh, has appealed to the government, the oil companies, mining companies and the good people of the Western Region to come to the aid of the Effia Nkwanta Regional Hospital (ENRH) to be recognised as a referral hospital befitting the region.

He said ENRH as it stood today was full of dilapidated buildings not fit for human habitat because no meaningful renovation has taken place since the hospital was built in 1945.

Hattoh was speaking to The Spectator in an exclusive interview after he handed over the Child Support Unit which he renovated to be used as a holding bay for COVID-19 patients. He said most of the buildings were very old and well designed with so many cracks that no human could agree to work in those structures.

The dilapidated structure was initially to be renovated for children, but the COVID-19 pandemic made it obvious for the structure to be used for the patients and would be converted back as Child Support Unit after COVID-19.
He said the region was well-endowed with so many natural resources like gold, manganese, bauxite, timber and recently the discovery of oil in large quantities.

The director told the The Spectator that it was not fair for important people to be lying in the same ward with the general public because privacy would be compromised.

He said in emergency cases people would have to receive first treatment at ENRH before referral and wondered how dignitaries could be admitted in the same ward with others.

According to him, there were enough avenues for companies to come and adopt some wards and their employees could be admitted into those wards.
He appealed to the traditional authorities to support ENRH for the hospital belonged to them.

The Medical Director of ENRH, Dr Joseph Tambil, who bemoaned the current situation of the hospital, said monies deducted from officers occupying official bungalows were not remitted to the hospital for renovation.

He said the mining, oil and timber companies must finance some projects in the hospital as all the wards which were supposed to be used for the VIPs were in very bad state and could not accommodate any dignitary.