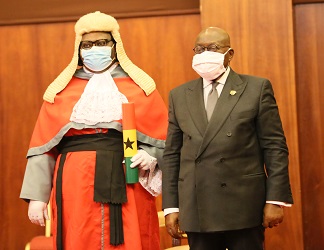 At separate ceremonies at the Jubilee House in Accra yesterday, President Akufo-Addo urged the new justices to enhance the quality of the work of the Apex Court with their rich experience in the legal field.

Justice Kulendi is a successful private legal practitioner who has earned considerable respect in the legal profession.

President Akufo-Addo described his appointment as a personal experience, indicating that Justice Kulendi had his pupilage at his chamber, Akufo-Addo, Prempeh and Co, and “cutting his teeth” in his early days at the bar.

President Akufo-Addo said the appointment of the two legal luminaries, which came on the heels of engagements with the Judicial Council, Council of State, and with the approval of Parliament, would help strengthen the development of the Court’s jurisprudence and case law.

He advised the Supreme Court not to follow decisions of any other court, including its own, and entreated justices of the court to possess sound knowledge of the law.

“Judges should not prefer judgments on the basis of decisions from lower courts and cite them as law,” he said and indicated that the situation where judges site no law at all should also be avoided.

“Justices must be learned, know their case law and ensure that their decisions and judgments are properly motivated,” he said.

President AKufo-Addo said the public expects that if anyone fell foul of the law, the person should be dealt with accordingly and appealed to judges to ensure that justice was done to all persons without any considerations.

Justice Prof Mensah Bonsu and Justice Kulendi thanked the President for nominating him to the Supreme Court and pledged to always devote their time and talents to serve the country to the best of their ability.