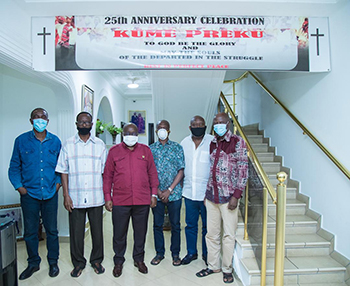 President Nana Addo Dankwa Akufo-Addo on Tuesday joined member of Council of State, Stanley Nii Adjiri Blankson at his residence in Accra, with four others to observe the 25th anniversary of the ‘Kume Preko’ to wit, ‘you may as well kill me’ demonstration.

The six were part of the leading members of the Alliance for Change, a pressure group that staged series of demonstrations across the country in 1995, against the imposition of the Value Added Tax (VAT) and what they described as economic hardship and corruption prevalent in the country under the then government.

In one of the demonstrations held in Accra on May 11, 1995, the demonstrators who were on a peaceful march on the principal streets of Accra were met by an opposition force, who opened fire on them resulting in the death of four persons and injuries to scores of others.

The group commemorated the day with a reflection over their past achievement in ensuring fairness and solemnly remembered those who unfortunately lost their lives and others that got injured in the demonstration.