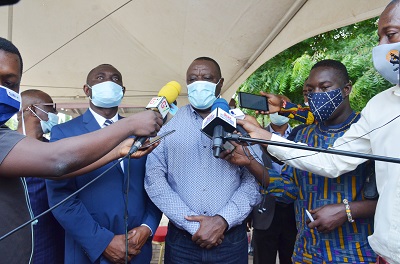 Five thousand business startups are to benefit from a soft loan facility totaling GH₵50million under the third window of the Presidential Business Support Programme (PBSP) which opens across the country today.

The beneficiaries would be selected from 26,000 entrepreneurs from all districts whose capacity would be built in marketing and business management as part of the programme.

Launched by President Nana Addo in 2017, the PBSP is aimed at assisting Ghanaian businesses with capacity building, money and funding for young entrepreneurs and start-ups.

At the launch of the new window in Accra yesterday, Minister of Business Development, Dr Ibrahim Mohammed Awal said 19,000 startups supported under the previous windows had created 90,000 jobs.

This, he said, was a testament of the need to support the youth to be job creators instead of job seekers since only two per cent of the nearly 250,000 young people who graduate get jobs in the formal sector.

“The rest must find jobs in the private sector hence the president’s commitment to entrepreneurship to train them, equip them, fund them and build capacity so that they can create jobs and employ more people,” he said.

According to Dr Awal, the country was largely a youthful population with three per cent of the young people below 30 years and that the government was determined to use the programme as a resource to enhance national development and create wealth for the people.

On his part, John Kumah, the Chief Executive Officer (CEO) of the National Entrepreneurship and Innovation Programme (NEIP), the agency coordinating the programme, said this year’s edition had been extended from 19,000 beneficiaries to 26,000 and GH₵40million to GH₵50 million to support more people.

He said 100 beneficiaries would be selected from each of 260 districts across the country and given loans ranging between GH₵5,000 and GH₵50, 000 with 10 per cent interest.

The interest, he said, was to sustain the pool of fund and support other people as well as incorporate the culture of loan repayments to enable them approach banks for loans in the future.

This year, he said, application had been decentralised and not done exclusively online, in response to concerns raised by prospective beneficiaries in the rural areas that internet access was an impediment.

He assured all prospective applicants of a fair and selection process as private consultants would be in charge of the selection after which the Monitoring and Evaluation department of the ministry would follow up.

“It is a very fair and transparent process. I urge all to apply through their district assemblies, every Ghanaian with a business idea is qualified,” he said.

On the recovery of loans, Mr Kumah, said it was about 70 per cent but the COVID-19 had slowed down recovery rate.