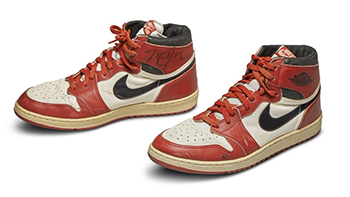 Trainers worn by double Olympic basketball champion Michael Jordan have been sold for a record amount at an auction.

The trainers went under the hammer in New York Sunday and fetched $560,000, more than four times their original estimate, as reported by Bloomberg.

Bidding for the Air Jordan 1s, custom-made for the former Chicago Bulls and Washington Wizards player, in sizes 13 and 13 a half, and in Bulls colours, started more than a week ago with predictions they would go for around $150,000.

The trainers were worn by Jordan during his rookie season with the Bulls in 1984-85.

They were auctioned by Sotheby’s, who held an earlier record for trainers at auction, when a pair of Moon Shoes by Nike was sold for $437,500 last year.

Today’s sale also broke the previous record for shoes used in sports sold at auction, when a pair of shoes worn by Sir Roger Bannister as he became the first man to run a mile in under four minutes, in 1954, sold for $409,000.

Sotheby’s said the Air Jordan 1s came from the collection of Jordan Geller, a collector and founder of the ShoeZeum, a trainer museum.

“It just speaks to Michael Jordan’s incredible legacy and people recognising him as the greatest athlete to ever play.”

The previous record for a pair of shoes worn by Jordan in a match was when a pair of converse shoes he wore at the 1984 Olympics in Los Angeles sold for $190,373 in June 2017.

Last month, a signed Jordan Dream Team jersey, which he wore as the US took gold in Barcelona, sold at auction for $216,000. –Insidethegames.biz