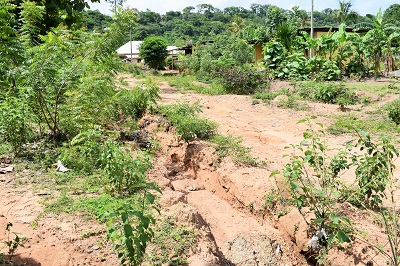 The collapse of pontoon services at Tsyome-Sabadu has become a major disincentive for farmers in the area as they are compelled to leave their produce to rot on their farms, due to the lack of transport to convey their produce to the market.

The farmers who mostly cultivate yam, cassava, sweet potatoes, pepper, garden eggs, okro, tomatoes and other vegetables have therefore appealed to the government to as a matter of urgency restore pontoon services in the area.

The  assemblyman for the area, Mr Amedor Senyo Dzamposu who disclosed this to the ‘Ghanaian Times’ here on Saturday said the people of Tsyome-Sabadu were displaced from their old town by the Volta River, Tsyome-Tornu, as a result of the construction of the Akosombo Dam in 1964.

That, notwithstanding, they maintained their fertile farmlands at the old site, eight kilometre away, said the assemblyman.

He said that it was initially easy for the farmers to transport their crops to Kpando and beyond with the vibrant pontoon services on the river.

However, with the recent collapse of the pontoon services, the farmers could no longer market their produce and that was unleashing hardship on them, as well as the entire community.

According to Mr Dzamposu, the farmers could not convey their massive harvests to the community by foot, and so they only brought home what they consumed.

He revealed that some uncompassionate middlemen took advantage of the situation and turned up on the farms to purchase the crops at ‘next-to-nothing’ prices.

“Now, some farmers are so frustrated that they want to give up tilling the soil,” the assembly man told the ‘Ghanaian Times’.

Similarly, he said, local fishermen who could no longer sell their stock left them to rot, in the absence of market.

Mr Dzamposu said that farming and fishing were the mainstay of the Tsyome-Sabadu, “but we are now losing our livelihood.”

Apart from the collapse of the pontoon service, he said that the 11 kilometre road from Tsyome-Sabadu to Awate where there was market for crops, was in a deplorable state; and that was not helping matters for the local farmers.

The assemblyman renewed his appeal to the government to intervene as a matter of urgency, to restore pontoon services in the area and also fix the roads.