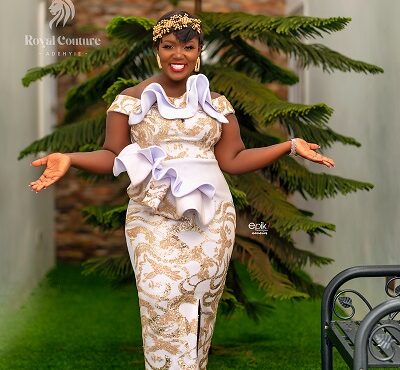 Enrico and Irene Giacobbe are the brains behind the amazing Royal Couture designs which are unisex. Meanwhile,Mrs IreneGiacobbe is the female creative director of the beautiful outfits worn by television hostess Cynthia TimaYeboah popularly known as TimaKukum.

Royal couture has been styling TimaKukum for over three years now when she was introduced to her by a friend who styled from her boutique named Diva’s trend.

MrsGiacobbesaid she agreed to styleTimaKukumbecauseAdom Television was made purely of African concept.

“For her televisionprogramme, Ghana Textiles Printing Company Limited (GTP) gives her the fabrics andI do the sewing. I sometimes use my own fabrics and do the sewing for her” she said.

MrsGiacobbe explained that “Tima’sone of the people who had  impacted on my  brand and throughthat people have now believe in our brands for quality outfits for all occasions” .

“People sometimes send her (TimaKukum) a message to style her but she refuses because she prefers the handy works of Royal Couture”. She stressed.

According to Cynthia TimaYeboah,“Royal Couture never disappoints when it comes to styling”.

I was born a designer – Abena Serwaa Ophelia