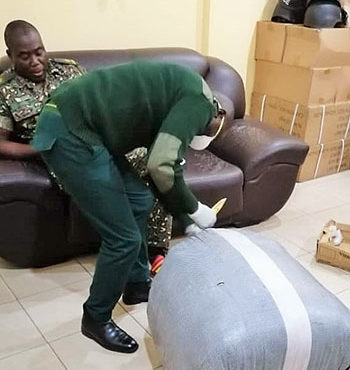 The security agencies in the Ketu South Municipality in the Volta Region have foiled another attempt by the notorious cross-border drug cartel there to cross into Togo with a huge consignment of dried leaves suspected be to marijuana, otherwise known as ‘wee’.

This time, three men who were spotted with a sack, by a joint team of personnel from the Ghana Immigration Service (GIS), Customs Division of the Ghana Revenue Authority and the Narcotics Control Board (NACOB) on a routine patrol exercise last Saturday at Beat 6 of the Ghana-Togo border fled, leaving behind the maxi sack containing the stuff, as the security personnel closed in on them.

The abandoned sack which was taken to the Aflao Sector Command of the GIS was found to contain 53 parcels of the dried leaves, weighing 22,683.3 grammes in total.

This comes barely 48 hours after 31 parcels of cannabis were left behind by four fleeing members of the cartel, at the Beat 11 border enclave near Aflao.

In both instances, the couriers were trying to enter Togo through unapproved routes when the security personnel pursued them.

In the earlier incident, it was established that two of the suspects were Togolese.

The officer in-charge of the Public Affairs Unit of the GIS in the Volta Region, Assistant Inspector Felix Klu-Adjei disclosed these to the Ghanaian Times in Ho yesterday.

He said that a manhunt for all the seven suspects was underway.

Meanwhile, he said that the parcels of dried leaves had been handed over to the Narcotics Control Board (NACOB) for further investigations.