The virus that eats Africa? 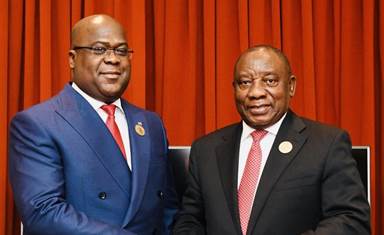 Why is the African continent so rich yet Africans are so poor? The continent has every natural resource under the sun, including diamonds, gold, oil, natural gas, uranium, platinum, copper, cobalt, iron, bauxite and cocoa beans. And the human resource as well, else our forebears would not have been taken into slavery to build many of the advanced economies we know today.

Where from the gold that backs the currencies of Europe? Where will America be today, but from the sweat and toil of our forebears who were forcibly taken into slavery and bondage and who broke their backs on the cotton and corn fields of that continent? It is not a statement of fact that we sold our own kinsmen into slavery. The colonialists set up agents on our continent to ambush and abduct what they termed ”Prime Negroes” for their slave ships; the forts and castles were their trading posts.

Question is: who owned the forts and castles? However, to rave and rant, or even gross over the episode might not help the African cause today, but history must help us know how far we have come. The Church and the British Crown commissioned most of the slave ships and took financial benefits on every single slave that was landed in the Americas. The Barclay brothers were the financial underwriters of the operation. They were later to convert into the Barclays Bank.

Indeed, the Blacks were not seen as humans. Rather, they were commodities owned by plantation owners and branded with flaming irons the way cattle are branded. Discussing the slave trade must not be a cold intellectual process. Instead it must be discussed in the context of one human’s inhumanity to another. After having deprived the African continent of a chunk of its human resource, these people descended on the land itself to pillage the minerals and other resources.

Our chiefs were too happy to receive schnapps and mirrors from the Europeans only to give out land for them to mine our minerals. In some cases the Europeans fought to take these minerals forcibly. One account has it that one chief was so enamoured of a mirror, because of the ‘magic’ of seeing his black face and a bucktooth grin of mouth with a wide diastema that he offered many women in his chiefdom to the “White Man.”

Africa has not recovered from all that has been done to it. There is not a sign that it will, sadly. There are many reasons for this assertion. For example, the River Congo has the capacity to supply the whole African continent a continuous hydro power for 50 years at the minimum, but these Western powers will ensure instability in that region so this never happens. So it is with cobalt, diamonds and other resources of the Congo Basin. The armed terrorists in that region are all funded by these powers through their multinational corporations who, under the cover of darkness and the pretext of mediation, mine these precious minerals from the earth.

For example, Cobalt is primarily used in lithium-ion batteries, and in the manufacturing of magnetic, wear-resistant and high-strength alloys. The compounds give a distinctive deep blue colour to glass, ceramics, inks, paints and varnishes. Uranium is a very important element because it provides the nuclear fuel used to generate electricity in nuclear power stations. It is the major material from which other synthetic trans-uranium elements are also made.

Platinum is used extensively for jewelry. Its main use, however, is in catalytic converters for cars, trucks and buses. Bauxite is aluminium-rich ore that is used for aluminium production and for production of refractory materials, chemicals or cements. All the above named minerals are expensive. However, Africa does not determine how much its resources should be sold; this is determined by the Western powers.

The West tell us that Africa has 30 percent of the world’s mineral resources. It is their way of telling us that we have only a third of the global mineral riches. Africa has more than this. Even if Africa has a third, that’s enough to make every African live way above the poverty line by Western standards.

We all know the value of cocoa. I do not want to overstate that here. All of West Africa have cocoa. But the price, as usual, is determined by the buyers. And our cocoa farmers are the poorest while the dealers in the West are the multi-millionaires who call themselves the connoisseurs of the cocoa industry. Another question is: how has Africa offended the rest of the world? The answer is very likely that we were too complacent and very satisfied with what we had, or probably we sat on such wealth without knowing it.

There is nowhere in history that Africans did not know the value of gold, diamonds and cocoa. The ancient empires of Mali, Songhai and Ghana were ruled by men who knew the value of their precious resources. The European propaganda presented Africa as a land of savages. There were more savages in Europe and the Caucuses than anywhere else in human history. They engaged in more fratricidal wars than any other continent. Agreeably, there were ethnic wars in Africa, but not on the scale of Europe.

Today, they control the largest arsenal for information dissemination and, therefore, are able to churn out news of famine, disease, deprivation and squalor in Africa. The African story from Africa is drowned in the cacophony of their noisome propaganda machinery. Their aim is to shoot down any rising star from the continent. They take pride in boasting to have eliminated the likes of Kwame Nkrumah, Patrice Lumumba, Sylvanus Olympio and, lately, Muamar Gadhafi.

The greatest pain in the backside of Africa is France. The French have a finger on each and every one of their former colonies on the African continent, save Guinea Conakry. These Gaullists never gave their colonies independence without a fight. At a point every francophone African leader was a member of the French Parliament, a policy that kept them in their controlling agenda. Until francophone

It is francophone Africa that enriches France. Without this, France might surpass Portugal as the poorest European country, so they have every reason not  tolet go of their hold on their former colonies. The French are adept at propping up African despots in power so long as they serve French interests. It is so with the West. Their economic interests supersede all else, even if hundreds will die as a result.

After pillaging the continent’s resources, they set up funds through which they channel an infinitesimal percentage of all they make and ‘donate’ them to us as aid to fight disease, poverty and squalor.  I am told Ghana makes less than 13 percent from its gold export, and almost same percentage from oil. And our governments are content with stipends from these countries as budget support, donor support, soft loans and all manner of nomenclature to convince their people that these sharks are friendly countries?

If we can untie and tell them they cannot take our raw gold, diamonds, bauxite, manganese and, more so, our cocoa without first putting up factories to process them here, there will be hope. We need jobs for our people, not handouts. We cannot continue to create jobs for their citizens out there while our university graduates walk the streets in search of jobs after their parents have toiled in the cocoa plantations to educate them.

Unfortunately, Africa has leaders who rather want to own their people instead of serving them. They kill to either remain in power or take power. We have chiefs who are not for their people. These are people who help the West to destabilise their own countries at every turn. Until Anglophone, Lusophone, Francophone (or any other phone) Africa speaks with one voice our continent will remain a fertile ground for the geopolitics of Europe, America, Russia and China.

To these powers, Blacks are just a virus that must be annihilated so they can take full control of the continent. I wonder if there is any other time for the launch of the African revolution and renaissance than now. These powers are the virus Africa needs to eliminate.