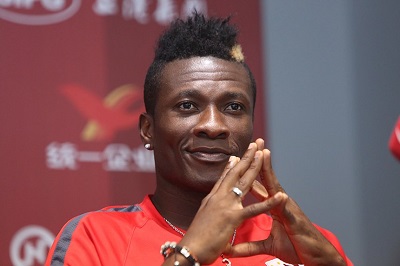 Sometimes, one gets the sense that the entire nation is just patiently waiting for the day Ghana’s legend Asamoah Gyan will bid a final adieu to football – and then get the tumultuous celebration that he so much deserves.

Indeed, Ghanaians have been waiting for that day, but it seems that moment would not come anytime soon – maybe.

From all indications, the ‘Baby Jet’ would have loved to entertain the world once more with the dexterity and skill that glorified his heyday: pace, power, control and finishing.

But that magnificent dream has been hampered by injuries to one of the nation’s most gifted players ever to trade his talent on the lush fields across the world.

It is the reason Gyan has not been able to glow with Legon Cities, a local premier league club he joined worth more than US$1million.

The lucrative deal – struck in November 2020, runs for four years and is by far a towering record in Ghana’s local league scene.

The Baby Jet zoomed into the domestic premiership for the first time in 17 years when he played for now-struggling Liberty Professionals.

Glaringly, many fans have been expecting a lot from the 35-year-old since strapping his mast to the Cities. Worryingly, it appears it is the case of the ‘soul is willing, but the body is weak’ for Gyan.

If you accost the fans in the street, they would waste no time in telling you to advise the former Black Stars’ skipper to hang his boots.

They think he has seen his best and has nothing much to offer.

“For me, Asamoah Gyan is a phenomenal player who has done so much for Ghana. But I think it’s high time he called time on football and rather take on a coaching job,” a 43-year-old football fanatic, who identified himself as Samuel Boadu, told this writer last week.

Boadu, perhaps, may have captured the minds of many.

It is not too clear whether it was one of the reasons Gyan was booed by a section of the Asante Kotoko fans when he came on as a second half substitute in the Cities 0-1 loss at the Accra Sports Stadium last Saturday night.

But Gyan did not take kindly to that antipathetic reaction, and in a post match interview, he reminded the fans about who “Gyan is.”

“There is only one Asamoah Gyan and they (fans) know it. They should even be grateful that I am playing in the Ghana Premier League,” Gyan, who has also been heavily criticised for putting on weight, said in response to the booing incident.

Of course, the Kotoko fan reaction could have emanated from a blazing disappointment over Gyan’s failure to sign for the club last year.

Gyan, a childhood fan of Kotoko, said he did not join Cities for monetary reasons.

“It is not about money. As a footballer, when you are going to a team, there is a lot that should favour you like environment. When it comes to money I’m blessed. I think Legon Cities have got a better project. They have got a lot of things to do in the future and I had to evaluate all.”

Maybe, after evaluating his present contribution to Cities (having played in only five matches or so), Gyan could sincerely be contemplating retiring from the sport that has given him global fame.

He has been a terrific player who has given absolutely all for Ghana.

Do not forget, the Baby Jet is Ghana’s record goal-poacher with 51 in 105 appearances and Africa’s leading World Cup scorer with six goals – three of which came at the 2010 tournament in South Africa.

In spite of his missed penalty against Uruguay that would have earned Africa a first-ever semifinal berth at the World Cup, Gyan will be remembered for the good he did rather than the odd negative moment – if he finally decides to bid adieu to football.

Indeed, hundreds have forgotten that bewitching equaliser he scored against England in that earth-shattering London friendly against Ghana that ended 1-1 at the Wembley on Tuesday, March 29, 2011.

Just when England looked to have secured a good victory through Andy Carroll, Gyan spectacularly pulled the dagger in the dying moments of the game – one of the most fascinating goals in living memory.

With a fleet of foot, Gyan dragged Joe Lescott out of position, turned and dribbled back into the space before sexily curling a shot past goalkeeper Joe Hart. It was a goal of class – that can only be manufactured by a legend!

A big legend, he is. But maybe, time to bow out! And, he would be massively celebrated!

Gyan  – Paid his dues to the game