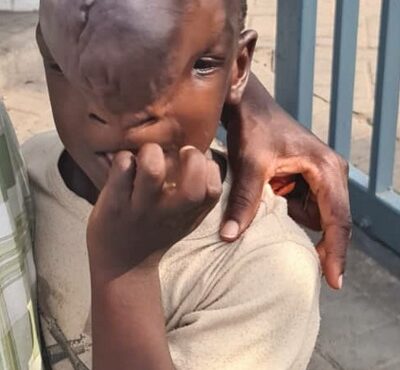 Following The Spectator’s publication on the plight of six-year-old Moses Bentum who is unable to attend school due to his facial deformity, two groups have moved in to offer some financial support.

They are members of the 2004 Year Group of the Accra Training College (ATRACO) and social group ‘XXVI Planners’ based in Madina who have donated a total amount of GH¢ 2,000 to support his medical bills.

Both donations were to pay for an MRI scan which according to his mother, Ms. Felicia Setuagbe, would among others determine the extent of damage done to his head and how much would be needed for the two surgeries he has to undergo to correct his face.

The rest of the money would also take care of some initial expenses and his upkeep in readiness for the process ahead.

The Group Leader of the 2004 ATRACO year group, Ms Vivian Adegbedu, said as teachers who handled children, they were sad to hear that Moses couldn’t go to school because of his condition hence their decision to support him with their widow’s mite to enable him to join his friends in school and also live a happy life, after surgery.

A Representative of the XXVI Planners, Xorlali Tettey, also said they were touched by the plight of the boy and as parents, they felt the need to do the little they could to support Moses and his mother in such challenging times.

Moses’ mother, Ms. Setuagbe, expressed appreciation to both groups and asked for God’s blessings for them.

She, however, asked that the group should return to support them when the bill for the two surgeries Moses has to undergo is given by the Korle-Bu Teaching Hospital so that her son could live a normal life.

She further called on public spirited persons to help her son who was diagnosed of brain tumour months after delivery to smile because his situation had always made him sad, timid and shy.

Moses was diagnosed of a brain tumour in his childhood and has undergone surgery three years ago in India to stop further growth of the the tumour. Currently, he needs two more surgeries to put his face in shape.