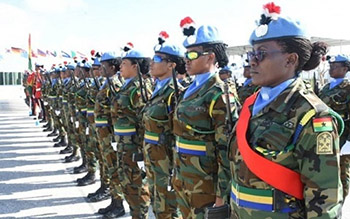 Amidst the global COVID-19 pandemic, a virtual solemn ceremony presided by the UN Secretary, General Antonio Guterres, is being held at the United Nations Headquarters in New York today, to commemorate the International Day of UN Peacekeepers.

It is in memory of those who lost their lives in the course of peacekeeping operations across the globe and also solidarise with the civilians, police, military who serve under the UN flag for their professionalism, dedication, and courage in the global maintenance of peace and security.

The virtual ceremony, in response to the WHO social distancing health protocol following the COVID-19 pandemic, is a departure from the traditional hoisting of flag with military parade as is the practice in many countries, including Ghana.

The UN chief lays a wreath in memory of the slain peacekeepers and awards the Dag Hammarskjold medal to 83 peacekeepers who lost their lives in 2019 in the line of duty.

The Peacekeeping Gender Advocate of the Year award will also be presented to the recipient at the virtual ceremony.

The 72nd anniversary of the peacekeepers day is on the theme “Women in peacekeeping -A key to peace’’ in recognition of the pivotal role of women in promoting sustainable peace and overall peacekeeping performance.

“Women peacekeepers are on the frontline in this fight and we are grateful for their dedication and sacrifice in supporting COVID-19 response efforts as well as in implementing the mission’s mandate within the current constraints and amidst difficult circumstance,” the UN website said.

The day is set aside to commemorate the first UN peacekeeping mission on May 29, 1948 when the UN Security Council authorised the deployment of a number of military observers to the Middle East to form the United Nations Truce Supervision Organisation to monitor the Armistice Agreement between Israel and its Arab neighbours.

Since then, more than one million personnel from troop contributing countries under UN have served in 72 UN peacekeeping operations, impacting the lives of millions of people and saving countless lives.

According to the UN, it has deployed more than 95,000 military, police and civilian personnel to maintain peace and security in 13 hotspots across the globe.

Ghana is recognised as one of the top 10 troop contributing countries, having first deployed troops in 1960, under the United Nations Operation in the Congo to help restore calm and order in that country.