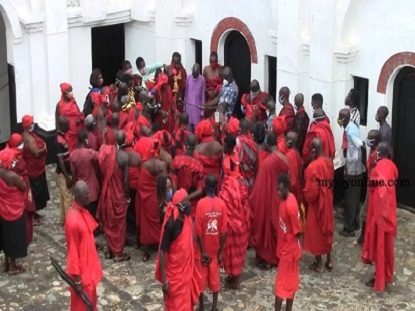 The Upper Dixcove Traditional Council in the Ahanta West municipality of the Western Region on Tuesday performed rituals asking their gods to deal  with some New Patriotic Party (NPP) stalwarts and the Member of Parliament (MP) for the area, Kojo Kum.

They alleged the MP insulted the Paramount Chief of the area, Obrempong Hima Dekyi XIV and the chiefs of Ahanta in a WhatsApp chat with his supporters.

Dressed in red and black war apparel, 48 chiefs from 48 communities under the leadership of the Upper Dixcove chief, chanted war songs, holding bottles of Schnapps and white ram in a procession to Obrempong Hima Dekyi XIV’s palace.

“It has come to our notice that some audio that is circulating in the public domain has used unprintable words to describe you our paramount chief and all chiefs on the Ahanta land.

“We deem these audios as disrespectful to our mighty throne, hence we have brought these Schnapps and ram to the gods to deal with the MP and all those who are involved,” the chiefs said.

The chiefs who performed several rituals from morning to midnight on Tuesday said the MP, together with his supporters would all face the wrath of the gods if they make any attempt to step on any land belonging to the Upper Dixcove paramountcy.

They have issued a two-week ultimatum to the governing party in the region to render an unqualified apology or blame themselves for consequences that would follow, should they step on any of the 48 communities in Dixcove.