US military accuses Russia of deploying fighter jets to Libya 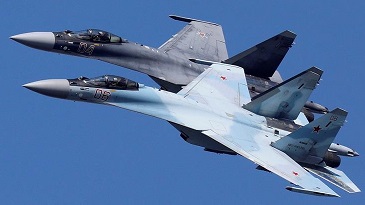 The US military accused Russia of deploying fighter aircraft to Libya “repainted to camouflage” their origin in support of mercenaries fighting for eastern-based commander Khalifa Haftar’s forces.

The allegation came as Russian Foreign Minister Sergey Lavrov yesterday told a Haftar ally that Moscow backed an immediate ceasefire and political talks that would culminate in united governing authorities.

The United States’ fighter jet accusation against Russia raises concerns of a new escalation in the nine-year-long conflict, despite Lavrov’s call for a truce.

“Russian military aircraft are likely to provide close air support and offensive fire,” the US Africa Command said in a statement.

The fighting in Libya has drawn in regional and global powers with what the United Nations described as a huge influx of weapons and fighters in repeated violation of a 2011 arms embargo.

Russia, the United Arab Emirates, and Egypt support Haftar’s eastern-based Libyan National Army (LNA), which launched an offensive a year ago to seize the capital, Tripoli.

However, in recent weeks the internationally recognised Government of National Accord (GNA) has, with extensive Turkish military backing, pushed Haftar back from his foothold in southern Tripoli and other parts of the northwest.

The US statement said the aircraft arrived in Libya “recently” from an airbase in Russia after briefly stopping in Syria, where they were repainted to conceal their Russian origin.

Russia has long denied any involvement in Libya’s conflict. There was no immediate response from the Russian defence ministry.

Hundreds of Russian military contractors in Libya were reportedly evacuated into central Libya during the past few days after retreating from fighting on the capital’s front lines.

“Russia is clearly trying to tip the scales in its favour in Libya,” he said. “Just like I saw them doing in Syria, they are expanding their military footprint in Africa using government-supported mercenary groups like Wagner,” he added, referencing the Russian private military contractor Wagner Group, which the UN said last month had 1,200 fighters in Libya.