Value of African beads and its importance in the Ghanaian society 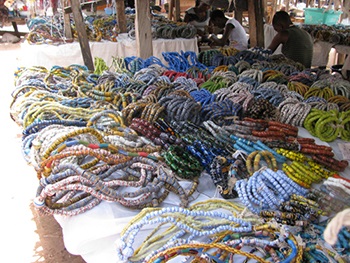 Have you ever thought of the beauty of African beads and how it heightens the beauty of the body when worn? Or has it ever occurred to you why a king sits majestically in his palanquin with different types of beads around his neck, hands and legs during festivals and durbars?

How about the numerous beauty pageants which aim at projecting the African value through the contestants?

Well, the answer is so simple, these demonstrate the creativity, cultural heritage and the taste we have for our own products.

Typically, in Africa, and to be precise, Ghana, the history of Ghanaian beads dates back to ancient times when they were first used as the king’s currency for the exchange of slaves, textiles and alcohol.

Later on, they became popular in ancient times for the rituals of girls. Today, they are as valuable as foreign exchange earners, and serve as tourist attractions. The modern-day woman, both African and non-African, is rediscovering the beauty of these Ghanaian beads which have become popular today.

Speaking to Miss Elizabeth Acquah, a professional in the field of bead making, she explained that the colours of Ghanaian beads have meaning. She said, in certain parts of Ghana, white coloured beads evoke fertility; blue coloured ones are associated with purity; while golden beads are a symbol of wealth.

She further said, ‘Bodom’ beads are yellow with a diamond shape design of a darker colour such as blue and were traditionally produced to be worn exclusively by African chiefs. Once you know what the colours of your beads symbolise, wearing them becomes a personal experience.

But in today’s world, beads have become very fashionable and can be worn by anyone at any time to anywhere, depending on the function.

Today, the importance cannot be spelt out in our Ghanaian society as they play significant roles in projecting our cultural values.

Apart from it being worn on the waist, and worn by chiefs and royals, it can also be worn anytime to any occasion. It can go with nice African print dress or any other nice outfit to church, outdoorings, festivals, weddings and any event. Beads are also used in making foot wears, handbags, earrings and necklace.

Some women also wear specific beads during sex to send a message to their partners. In the Ashanti and Krobo cultures of Ghana, large beads or bells are added to a woman’s waist beads once she is fertile so she makes noise when she walks to alert potential suitors and this serves as a symbol of femininity.

Waist beads serve as a natural waist trainer for some women. Wearing of beads can easily tell an African woman whether she is gaining or losing weight. If you were to gain weight, the beads will sit higher on the waist or feel tighter, conversely, if you were to lose weight, the beads will feel loose and fall further down to the hips. Waist beads can be worn all day, every day.

There is a belief that beads improve a woman’s curves. Hence, African baby girls are made to wear beads to enhance their curves and also to give them shape as they reach their adolescent stage.

Also, beads are used to mark family status, especially on special occasions such as rites of passage of girls to puberty called ‘dipo’ practised by the Krobos.

Beads can also convey identity and cultural significance. For instance, if a woman is married or a man is a warrior or an elder, the beads on them will indicate it. Large and colourful beads symbolise wealth and social status. Blue beads are thought to enhance fertility.

Some people also believe that waist beads have some healing and protective charms that keep danger away. They are said to relieve people from stress, anxiety or relax the nerves during pregnancy.

Beads are the fundamental part of the Ghanaian heritage. Not only do they testify of the vibrance of the Ghanaian creativity, they also play a significant role in the country’s history, rituals and culture. Sometimes, the waist beads are just a show of love for the Ghanaian and African heritage at large.

For many communities, girls put on beads to signify their transition from adolescent into womanhood.

To conclude, beads play an important role in our Ghanaian society, so anytime you think of heightening your image in various ways, think about beads. And note that every African bead conveys pride, beauty, culture, power and identity.