Vultures: Natural cleaners of the environment 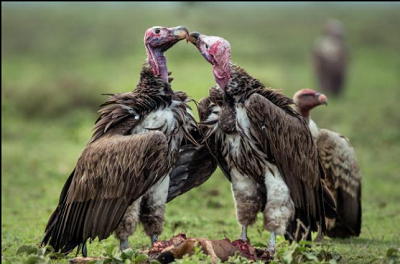 The Ghana Wildlife Society (GWS) has identified “intentional poisoning” and killing of vultures as part of reasons for the decline in vulture population across the country.

Though it is considered “illegal” per the Wildlife Acts in many jurisdictions, the society said some individuals and communities continued to consume vulture meat while also trading in its parts for ritual purposes.

Mr Thomas Gyimah, Acting Manager, Biodiversity Research and Conservation at the Ghana Wildlife Society told The Spectator in an interview that vulture eggs, feathers, and other parts were being sold at exorbitant prices for ritual purposes.

“Some whole or dried vulture parts are sold close to GH¢2,000 and people are making money from them. People have confirmed killing and using vultures as a delicacy and there are vulture restaurants in parts of the country, he noted.

This, among other factors, according to him, was fast making vultures a critically endangered species, especially in Ghana.

Speaking ahead of the International Vulture Awareness Day which comes off today September 5, 2020, Mr Gyimah explained that, scavengers including vultures played an important role in the environment, hence the need to conserve the remaining species available.

According to him, vultures were often considered as “dirty animals” because they fed on carcasses, nonetheless it is supposed to be the “cleaner of the environment”.

“Their digestive system is so strong that they could quickly devour large amounts of flesh and their stomach acids neutralise pathogens, so they are able to digest them and it does not come back to the environment, they are disease control agents and environmental cleaners,” he explained.

This, he said, was very vital in the containment of bacteria and diseases such as anthrax and rabies.

Mr David Daramani, Principal Programmes Assistant, Ghana Wildlife Society also insisted that without vultures, foul smelling carcasses would likely linger longer, insect populations would boom, and diseases would spread to people, livestock, and other wild animals and this would have dire repercussion on the country.

He said the birds had been starved in their habitat over the years, therefore they had adapted to coming closer to human settlements to find food to survive.

He, however, lamented that some people had turned to killing and consuming it as their preoccupation — a situation he noted had caused a decline in the population of the birds and “if nothing is done we can lose them all”.

Mr Gyimah confirmed that there were about seven species of vultures in Ghana and four  out of those species were endangered.

“Their population has dwindled to the extent that, nobody seem to care about them and we need to do something to save them. We must be prepared to battle diseases and other environmental challenges when vultures are extinct,” he also noted.

The wildlife official highlighting other threat to vultures, said the use of household and industrial chemicals also contributed to the “unintentional poisoning” of vultures.

He observed that electrocution on pylons as well as deforestation had affected vulture habitat and their reproductive ability, hence the need to intensify efforts at conserving the animals. He said because vultures laid only few eggs every year or two, their populations were usually few.

Mr Gyimah  has therefore appealed to the public to stop killing vultures or buying its parts, as there was no scientific proof that vulture parts could treat any disease or even possessed any magical powers.

He also urged government to help enforce the Wildlife Act and its specific aspects that protected vultures, adding that, the society as part of the awareness day, intended to identify areas in the country where vultures were still available and try to protect them.

As part of the activities, citizens were asked to take pictures of vultures they saw and send them to the GWS social media handles to aid in locating and identifying the species.