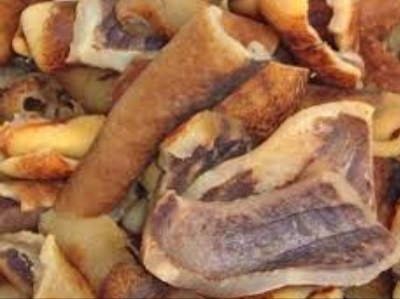 Cowhide or cow skin popularly known as “wele” in the local parlance is one of the highly patronised delicacies  by the public.

It is mostly sold by waakye (rice and beans) sellers and banku with okro stew or soup sellers.

A “wele factory” is doing well in the Tema West Municipality around the “Underbridge” Market at  Adjei Kojo in the Greater Accra Region.

It is being manned by a 42-year-old Alfred Tetteh who says he has been in the business of processing wele for 26 years though he is less than a year old in the Tema West Municipality.

Every day of the week, trucks, tricycles and  vehicles troop to the place to take their stock for further processing and distribution to the  various markets centres.

In an interview with “The Spectator”, Mr. Tetteh said he learnt the skill of preparing wele as an apprentice for three years at Teshie, a suburb of Accra.

He said “it takes someone three years in ther wele business to undergo apprenticeship just like learning any other trade like carpentry, hair dressing, welding, sewing etc.

He said a beginner was admitted and trained on rolling of the cowhide (just like a woolen carpet is rolled) and  observing  also how the process takes place.

He said the apprentices, wearing thick hand gloves (to protect their hands from fire and other possible dangers) would roll the cowhides because they were usually brought to the warehouse looking flat.

Mr. Tetteh said the cowhides were imported from Kenya, Mauritania, Guinea, Egypt and other African countries and he received as many as about 2,000 pieces of  consignment at a time.

He described the wele business as  lucrative but tiresome which needed a lot of commitment.

The 42-year-old said he had employed three people aside his several apprentices and supplied to about 15 regular clients from Ashaiman, Kasoa, Teshie and Accra Central, apart from the many others who also prepared the cowhide for further sale to traders who sold them at many other markets.

Going through the process of preparing the cowhide into wele, he said he and his team could work at anytime including as early as 2am, depending on the demand by his  clients.

Reacting to a question why he uses logs  not car tyres, for singeing, he described the latter as dangerous and  a threat to human health.

As to why some of the wele are hard and others soft, he explained that the soft wele was from bulls while the hard wele  from cow.

Mr. Tetteh said his wife also traded in wele  and the business had helped them to take care of themselves and their children.