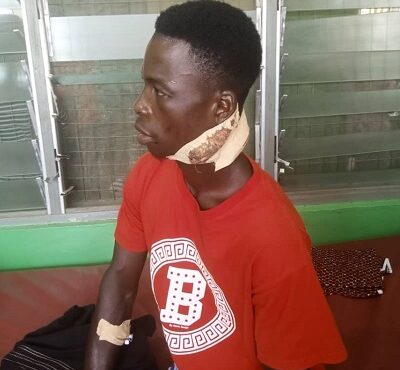 A married woman who could no longer withstand the harsh treatment in her marital home, is alleged to have inflicted cutlass wounds on her husband in reaction to his conduct.

The victim, Mr. Abraham Acquah is said to have hit his wife, Madam Mary Quaye, popularly called Obaa Yaa with stick during an argument.

This did not go down well with Madam Quaye who reacted violently by using a cutlass to inflict wounds on her husband in revenge.

The unfortunate incident occurred at Agona Duakwa in the Central Region on Sunday, April 25, 2021, at about 1:00am.

Mr. Acquah was rushed to the Agona Swedru Government Hospital for treatment for sustaining multiple wounds on his left jaw, neck and shoulder.

But Ms. Quaye was immediately detained when she went to the police station in the company of her husband to report the case.

Briefing the media, the Central Regional Police Public Relations Officer, DSP Irene Oppong explained that the incident occurred on Sunday around 1 am.

She said, the police after receiving the complaint around 4 am, proceeded to the Agona Swedru Government Hospital where they met the victim, Mr. Acquah aged 30, at the Emergency Ward with multiple deep cuts on his left jaw, neck and shoulder.

She said, a police medical report form was issued to the victim for endorsement by the medical doctor.

DSP Oppong explained that, the couple later went to the police station to make a report on the incident as they were currently residing in the same town and Mary Quaye was arrested.

Meanwhile, complainant Mary Quaye a.k.a. Obaa Yaa, who was the complainant but now a suspect, is assisting the Police in their investigation.