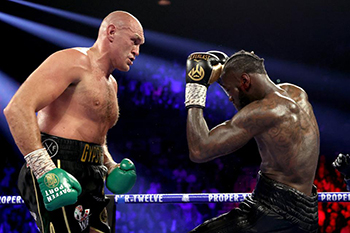 Tyson Fury warns that Deontay Wilder is fighting “to prove his worth” in their third meeting and still retains his “one-punch” threat.

Fury dominated Wilder to claim the WBC heavyweight championship in February after their first fight was scored a draw. Wilder intends to exercise his right to share the ring for a third time.

“Still a very dangerous opponent, still a very hungry man, who is coming in there to prove his worth, to prove he can come back and become a two-time heavyweight champion.

“More dangerous than the last fight, for sure.

“Do you know what? It’s just a boxing match. It’s a boxing match, I don’t look at it like anything else. You win some, you lose some. You never can tell.”

The trilogy fight between Fury and Wilder is being considered for outside of the US and the UK due to the coronavirus pandemic.

“I’m looking forward to the challenge, whenever that may be,” Fury said.

“I’ll get over there, nice and early, eight to 10 weeks beforehand. Put in a good, gruelling training camp.

“Hopefully, I’ll be injury-free and we’ll go out there and dance beneath the stars, in front of the world after the coronavirus.

“God willing everything goes to plan, and we both get out the ring safely, and go back to our families in one piece, and the show continues to the next one, whatever that may be.

“I’d love to get out there and do what I do best, boxing, but it’s out of my hands. It’s out of everybody’s hands, apart from people who are running the world, and unfortunately, I’m not one of those, and I’m glad I’m not because that job is difficult. Much more difficult than taking punches in the face for money.”

Fury insisted that his fun-loving shenanigans will continue throughout his second reign as world heavyweight champion.

“We will see more Batman, more fun and games during the next press conferences,” he said.

“Always different with me. I don’t think anyone has ever come out to Patsy Cline before ever, in a world heavyweight title fight, dressed as a king. I don’t think that will ever be done again, for sure.

“It just keeps going, the Tyson Fury train keeps rolling on, nice and strong, and who’s going to stop it? Nobody.”

Fury knocked out Wilder in the seventh round of a sensational, historic performance to become the WBC heavyweight champion in Las Vegas.- Sky Sports