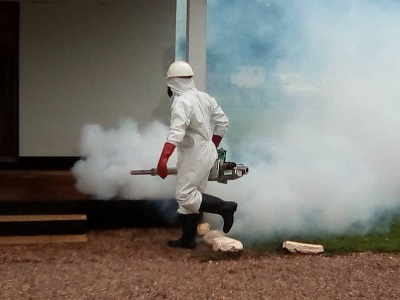 According to the Northern Regional Manager of the Savannah Waste Management, a subsidiary company of Zoomlion, Mr Peter Dawuni, the exercise formed part of the strategy to combat the spread of the coronavirus pandemic.

He stated that military institutions and installations were critical to development hence the urgent need for the disinfection exercise.

According to Mr Dawuni, military personnel needed to be protected thus the disinfection exercise within the barracks would protect them from the pandemic.

In a related development, GRACE SENAM KLAY, HO reports that the company on Tuesday started disinfecting military facilities, private and public basic schools and tertiary institutions in the Volta and Oti regions.

About 55 Military facilities, 2,654 private and public basic schools and 20 tertiary institutions were to be disinfected by June 30.

Speaking at a Press Conference yesterday at Ho, the Regional Minister, Dr Archibald Yao Letsa indicated that all Municipal and District Chief Executives had been directed to engage with their respective Directors of Education to monitor the exercise under their Jurisdiction.

He advised the public to abide the preventive measures and comply for the transmission chain to be broken.

“If COVID-19 is no more with us we won’t be spending money for these disinfection exercises”, he said.

The Volta Regional Director of Education, Madame Enyonam Afi Amafuga, noted that students who would resume school and classes would open for four hours.

She mentioned that they might not be given the one meal that they received every day from the school feeding programme.

“This is to avoid the risk of infecting students, that is why we are ensuring that they eat from the house before coming to school”, she added.

Ms Amafuga assured that the Ghana Education Service would have a monitoring system in the regions and districts to monitor activities in all schools.

On his part, Lt Col Bernard Baba Pantoah, the Commanding Officer of the 66 Artillery Regiment, disclosed that there would be a mass testing for over 400 military personnel and their families.

He mentioned that the regiment was collaborating with relevant stakeholders to ensure everybody did the right thing.

“It is not about the military enforcement, but it is for ourselves to know that all protocols put in place is for our own good”, he added.