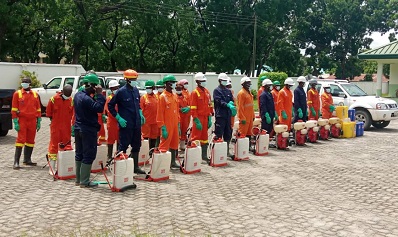 Zoomlion Company Limited is set to disinfect 815 educational institutions in the Upper West Region, before the partial reopening of schools for final year students on June 15  and 22, respectively.

The company is expected to disinfect 702 public and 102 private basic schools as well as 11 tertiary institutions in the region.

The Upper West General Manager of the Zoomlion Ghana Limited, Mr Emmanuel Volsuuri, announced these at a media briefing on the fumigation exercise, at Wa on Wednesday.

He stated that due to the short time for tertiary institutions to reopen, the exercise would commence from those institutions “before going down to the basic schools”.

Mr Volsuuri indicated that 850 sprayers have been deployed for the exercise across the region, to ensure that the fumigation commenced concurrently in every district.

“We have already fumigated the senior high schools, hence the final years at that level can report back to school as mandated by the Presidential directive on the partial reopening of schools,” he said.

Mr Volsuuri said his outfit had received all the materials needed for the exercise, and gave the assurance that, the sprayers would work assiduously to ensure that the schools were disinfected within the stipulated time to ensure prompt reopening.

President Nana Addo Dankwa Akufo-Addo on May 31, 2020, announced the re-opening of schools for final year students of junior and senior high schools as well as the tertiary institutions.

The fumigation exercise is one of the several safety measures being put in place to herald the reopening of the schools.

FROM LYDIA FORDJOUR AND RAFIA ABDUL-RAZAK