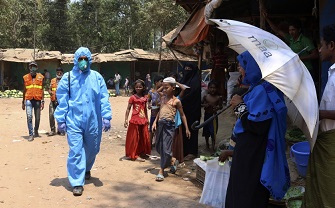 At least 15,000 Rohingya refugees are under quarantine in Bangladesh’s vast camps, as the number of confirmed coronavirus infections there rose to 29.

Health experts have long warned that the virus could race through the cramped settlements, housing almost a million Rohingya who fled violence in Myanmar, and officials had restricted movement in the area in April.

Despite this, the first cases in the camps were detected in mid-May.

“None of the infections are critical. Most hardly show any symptoms. Still, we have brought them in isolation centres and quarantined their families,” Toha Bhuiyan, a senior health official in the surrounding Cox’s Bazar area told AFP news agency on Monday.

He said narrow roads to three camp districts – where the majority of the infections were detected – have been blocked off by authorities.

The 15,000 Rohingya inside these so-called blocks faced further restrictions on their movement, he said.

This comes as charity workers expressed fears over being infected in the camps as they worked without adequate protection.

Two of the areas under isolation are in Kutupalong camp, home to roughly 600,000 Rohingya.

“We are trying to scale up testing as fast as possible to make sure that we can trace out all the infected people and their contacts,” Bhuiyan said.

Seven isolation centres with the capacity to treat more than 700 COVID-19 patients have been prepared, he said, with officials hoping to have just under 2,000 by the end of May.

But, according to Nay San Lwin, co-founder of Free Rohingya Coalition, there are not enough ICU beds and ventilators available for refugees and the local community in Cox’s Bazar region.

Mahbubur Rahman, chief health official of Cox’s Bazar, said authorities hoped this week they would double the number of tests being performed daily, which stand at 188.

He said further entry restrictions have been imposed on the camp, with a 14-day quarantine in place for anyone visiting from Dhaka.